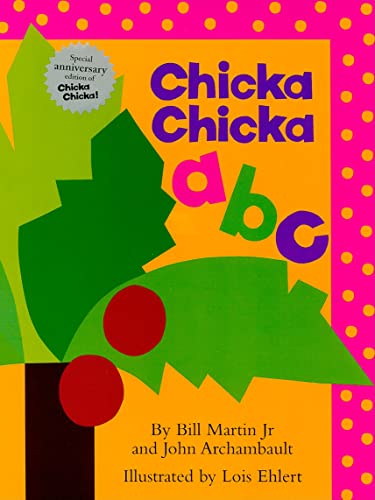 So begins the lively alphabet rhyme that children and their parents love to recite. Martin and Archambault's rhythmic chant and Caldecott Honor artist Lois Ehlert's bold, cheerful art has made Chicka Chicka Boom Boom a favorite for twenty years! To celebrate the 20th anniversary, we are offering a new lap-sized edition of Chicka Chicka ABC that will surely delight a new generation of Chicka Chicka fans.

A rollicking alphabet chant for the youngest child! All the letters of the alphabet race up the coconut tree in this colorful board book version of the award-winning Chicka Chicka Boom Boom.END

Bill Martin Jr (1916–2004) has been called “America’s favorite children’s author.” He wrote more than 300 books for children, including the classic texts Brown Bear, Brown Bear, What Do You See?, illustrated by Eric Carle; and Chicka Chicka Boom Boom, illustrated by Lois Ehlert.

John Archambault is a poet, journalist, and storyteller who worked with Bill Martin Jr on several projects. He lives in Idyllwild, California.

Book Description Board Books. Condition: New. Board Books. "A told B,and B told C,"I'll meet you at the top of the coconut tree."So begins the lively alphabet rhyme that children and their parents love to recite. Martin.Shipping may be from multiple locations in the US or from the UK, depending on stock availability. 16 pages. 0.521. Seller Inventory # 9781416984474