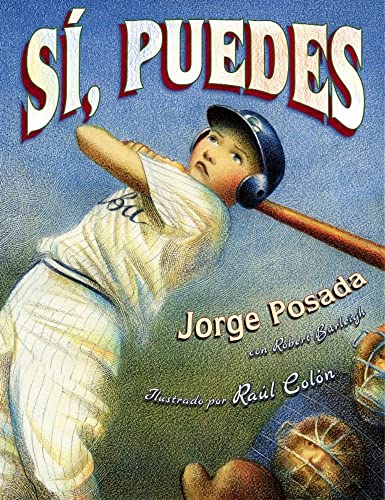 Presents a story of right-handed Jorge Posada being coached by his father to bat left-handed, and how it leads right to the major leagues.

Jorge Posada is an all-star catcher for the New York Yankees, a position he has held since 2000. Laura Posada is an attorney, a certified personal trainer, and CEO of Laura Posada, LLC. The couple lives with their two children, Jorge Luis and Paulina, in Florida.

Robert Burleigh is the award-winning author of many books for children, including The Adventures of Mark Twain by Huckleberry Finn, illustrated by Barry Blitt; Night Flight, illustrated by Wendell Minor; Black Whiteness, illustrated by Walter Lyon Krudop; and Sylvia’s Bookshop, illustrated by Katy Wu. His many other books include Hoops; Stealing Home; and Clang! Clang! Beep! Beep! He lives in Michigan.

Raúl Colón is the award-winning illustrator of many picture books, including Draw! an ALA Notable Book and recipient of the International Latino Book Award; Imagine! an ALA Notable Book, a New York Public Library Best Book for Kids, and a Bookpage Best Book; Susanna Reich’s José! Born to Dance; Angela’s Christmas by Frank McCourt; and Jill Biden’s Don’t Forget, God Bless Our Troops. Mr. Colón lived in Puerto Rico as a young boy and now resides in New City, New York, with his family.