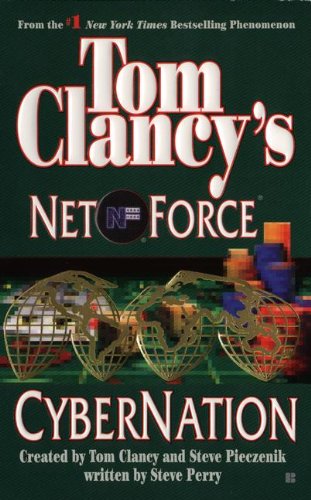 In the year 2010, computers are the new superpowers. Those who control them control the world. To enforce the Net Laws, Congress creates the ultimate computer security agency within the FBP the Net Force.
When web service is disrupted across the world, a new nation makes its presence known. Terrorists from a virtual country called CyberNation have taken the web hostage. Their demands: worldwide recognition and rights for their "citizens." Though there are millions of CyberNation sympathizers, Net Force rallies its troops for an all-out war on three fronts -- politically, physically, and electronically -- because dealing with terrorists is never an option...

Tom Clancy is the author of numerous #1 bestselling novels including Rainbow Six, Executive Orders, and Debt of Honor. Steve Pieczenik is the author of State of Emergency and co-creator of Tom Clancy's Op-Center series.

Book Description San Val, 2001. Condition: Good. Shows some signs of wear, and may have some markings on the inside. Seller Inventory # GRP112141583

Book Description San Val, 2001. Condition: Good. Former Library book. Shows some signs of wear, and may have some markings on the inside. Seller Inventory # GRP113744835

Book Description San Val, 2001. Condition: Good. A+ Customer service! Satisfaction Guaranteed! Book is in Used-Good condition. Pages and cover are clean and intact. Used items may not include supplementary materials such as CDs or access codes. May show signs of minor shelf wear and contain limited notes and highlighting. Seller Inventory # 1417646217-2-4