Items related to Song in the Silence: The Tale of Lanen Kaelar

Kerner, Elizabeth Song in the Silence: The Tale of Lanen Kaelar

Song in the Silence: The Tale of Lanen Kaelar 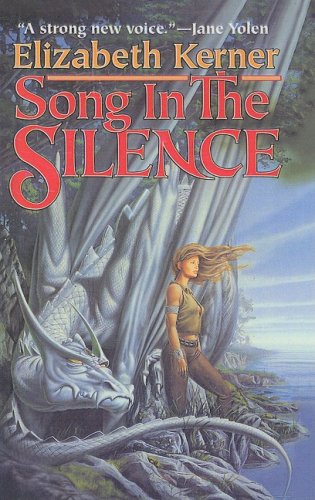 Lanen Kaelar has dreamed of dragons all her life. But not just dreaming, for Lanen believes in dragons.

Her family mocks her that dragons are just a silly myth. A legend. But Lanen knows better. And she means to prove it. One day she sets out on a dangerous voyage to the remote West to find the land of the True Dragons.

What she discovers is a land of real dragons more beautiful—and surprising—than any dream she could have imagined.

Elizabeth Kerner, as the daughter of a Navy doctor, has always found the simple question 'where are you from?' one of the most difficult. Born in Florida in 1958, she spent much of her early life being moved around the Northeast and the South of the US, including a brief but glorious sojurn in Kodiak, Alaska in 1969. She started writing while in high school in New Orleans and no-one has managed to stop her since. She received her MA in English Language (Philology) from St. Andrews University in Scotland in 1981, being one of the first Americans to complete a full degree course at that institution, and promptly joined the unemployment line. She spent a number of years as a non-fiction editor of medical and scientific books and journals, but when she moved to Hawaii in 1988 a whole series of new possibilities arose and she was variously employed as a grunt in the woodworking industry, an office manager for the Big Island AIDS Project, a trainee in furniture restoration and an apprentice goldsmith. By this time, however, her writing was starting to go somewhere, and her first novel, Song in the Silence, was published in 1997 by Tor.

She now lives with her best-beloved husband Steven in a small town just outside of Edinburgh Scotland, and from her upstairs window can just see, if she leans out, the looming towers of the nearby power station. If anyone would care to dynamite several inconvenient homes that are in the way, she would have a sea view. Any reasonable offers considered.

i
DREAMS IN THE DARK


And the Dragons' song, so wild and strong,
fell from the sky like rain
upon my soul; which, watered well
bloomed with a joy no words can tell
where once was a dusty plain.

1. Song in the Silence: The Tale of Lanen Kaelar

2. Song in the Silence: The Tale of Lanen Kaelar

Book Description San Val, 1998. Condition: Good. A+ Customer service! Satisfaction Guaranteed! Book is in Used-Good condition. Pages and cover are clean and intact. Used items may not include supplementary materials such as CDs or access codes. May show signs of minor shelf wear and contain limited notes and highlighting. Seller Inventory # 1417670177-2-4