Items related to Aryan Sun Myths: The Origin Of Religions 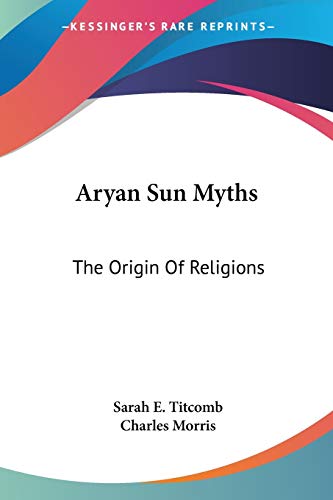 Book Tree provides over 200 titles of similar interest, all available (and searchable by "publisher") through Amazon.

This fascinating book traces various mythologies of the sun from the earliest of times in ancient Sumeria up through and including modern Christianity. The various sun myths that preceded Christianity became common to most cultures, as cultures often shared their myths when making contact with each other. As a result, many of the pagan religions shared the same general sun myths while using different gods to represent the same story.

It is convincingly presented in Aryan Sun Myths that when Christianity appeared on the scene it too adopted different facets of the sun myth story. This was done in order to unify the various pagan groups and make them more comfortable in accepting Christianity. It is fascinating to study the earlier forms of the sun myth, as presented here, and be able to recognize certain stories of the savior Christ within them. This is not to say that Jesus himself is a complete myth, but that certain mythologies were added to his life to make the "theology" complete. The evidence is hard to refute -- although determining the exact degree of this union will always be beyond the realm of irrefutable proof. After all, these are stories. When the stories are added to an historical personage who's life is documented so sparingly to begin with, we find it difficult, in some cases, to know and to prove which is which. Titcomb, however, does an admirable job using available evidence to determine this.

Buddhism is also explored as much as if not more than Christianity in this book. An interesting connection is brought out linking the Buddhists to the Essenes, an early Jewish sect that may have influenced Jesus.

Such surprising connections are found throughout the book andprovide ample evidence that the earliest known mythologies concerning our life-giving sun have been handed down to us throughout the centuries, often disguised or hidden in our current religious systems.