Items related to Autobiography of My Dead Brother, Performed by J.D....

Autobiography of My Dead Brother, Performed by J.D. Jackson 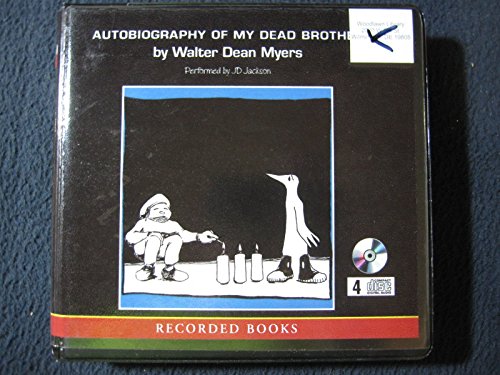 From Booklist Gr. 8-11. Funerals for young black men, both murdered in drive-by shootings, begin and end Myers' sobering story about contemporary Harlem teens. Fifteen-year-old Jessie has always seen slightly older Rise as a hero, and the boys made a blood-brother bond as children. Then Rise pulls away, starts dealing drugs and "fronting cool," and Jessie struggles to find his old friend beneath the new persona. His search leads him to art, which is his great talent, and he begins to create a biography of Rise in pictures. Frequent and striking black-and-white illustrations, done by Christopher Myers, depict pivotal moments from the boys' youth; there are also comics-style panels, in which a bird-boy character asks how best to live and communicate truthfully. The plot, which drifts a bit, isn't the focus here. What will affect readers most is Jessie's sharp, sometimes poetic first-person voice and the spirited, rhythmic dialogue of other vivid characters, who ask piercing questions about how to survive the violence and hopelessness rooted through a neighborhood's generations. Gillian Engberg

1. Autobiography of My Dead Brother, Performed by J.D. Jackson