Items related to The Life and Times of Constantine the Great

Kousoulas, D. G. The Life and Times of Constantine the Great

The Life and Times of Constantine the Great 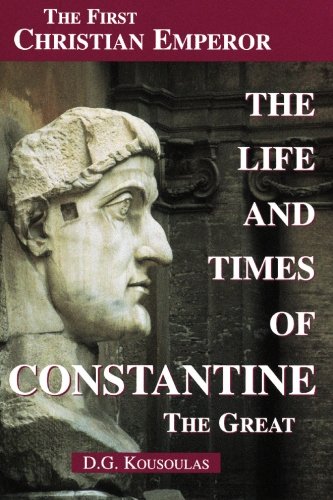 Editorial Reviews C.N.Kolitsas, Greek American Book Review: 'Kousoulas has great sorytelling abilities, making the volume of 500 pages fly by like 50. Henry J. Ferry, Mediterranean Quarterly: '...fascinating, filled with dramatic details, lucid...' Spotlight Reviews R, Smith (Chicago, il) : 'This is history writing at its best.Simply put, it is one of the best history books I have ever read.' George Athas (Sydney, NSW, Australia): 'A masterful treatment. This book is a very easy read, but the more you turn the pages, the more you realize the sheer volume of research that Kousoulas has put into it...Thoroughly recommended !' C. Cayzar (Iowa, USA): 'The best book on Constantine in the market today in my opinion.'

The accurate but also vivid presentation of Constantine's life was made possible with the extensive use of the original sources in Latin and fourth century Greek. Several books have been written about Constantine and the late Roman Empire but most were written for scholars and readers with a special interest in the period. This biography is written for the general public because Constantine deserves to be more widely known.

From the opening pages with the futures emperor's obscure birth, the son of an innkeeper's daughter, to his rise to supreme power, this book paints a vivid portrait of a fascinating and complex man. Covering: Constantine's early years in the Hellenistic East under Diocletian during the violent persecution of the Christians; his escape from the court of Galerius and elevation to Augustus in far off Britain; his marriage to Fausta -- the woman he would later send to a horrible death; his brilliant military campaigns; intrigues and betrayals he has to counter; his victory at the Milvian Bridge outside of Rome under the mystical sign of Christ; his proclaiming religious freedom for the first time in history; his decisive role at the Council of Nicea; the tragic events in the summer of 326 in Rome; the building at the Straits of Bosporus of a "new Rome" to bear his name; his coming to see himself, through tragedy and triumph, as the chosen instrument of the Christian God, finally being baptized just before his death -- all of this and more awaits the readers as they journey back to The Life and Times of Constantine The Great.

1. The Life and Times of Constantine the Great

2. THE LIFE AND TIMES OF CONSTANTIN

3. The Life and Times of Constantine the Great: The First Christian Emperpor