Items related to Lady in the Hood

Moore, Dorothy Lady in the Hood

Lady in the Hood 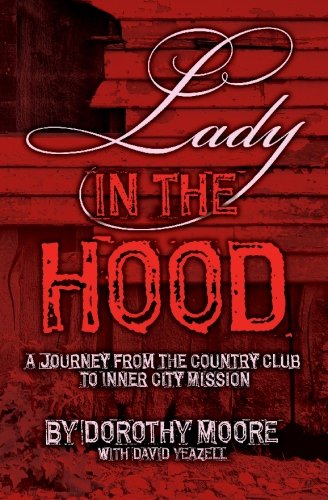 Lady in The Hood is the story of one woman’s journey from the privileged life of a New York debutante to the establishment of an inner-city mission in a drug and gang infested East Dallas neighborhood. Born into a family of wealth and social prominence, Dorothy Moore was raised with all the trappings of the East Coast elite: a nanny, servants, private prep schools and vacations in Europe and the family’s 400-acre retreat in Illinois. Relocated to her husband’s home state of Texas, Dorothy eventually found a dynamic personal relationship with Christ at a Christian seminar that forever transformed her “elite” attitudes into those of a true servant. Drawn to the needs of Dallas’ inner city, Dorothy was instrumental in establishing a dynamic ministry that currently touches hundreds of lives through life transforming residential programs. See how one “lady” obeyed Christ, crossing social, economic, racial and gender barriers to reach out to “the hood”—a once forgotten corner of urban blight that is now touched by the hope of transformation that comes from a great God!

Dorothy Moore’s dynamic teaching ministry has touched countless lives at home and abroad; ministering across Texas as a representative of Woman’s Aglow, and presenting seminars to women in Singapore, India, Romania, Indonesia, Mexico, Estonia and Ethiopia. Dorothy’s ministry reflects the heart of God to see His children walk in complete spiritual, emotional and physical healing (teaching on subjects as varied as street ministry, breaking generational curses and deliverance); and is marked by a strong emphasis on reconciliation between people from diverse backgrounds, ethnicities and cultures. A former radio talk show host, social worker in a trauma unit, “700 Club” counselor and ordained minister, Dorothy holds a B.S. degree in Christian Counseling and has pursued graduate studies with Kings Seminary under Pastor Jack Hayford. In 1987, Dorothy founded Reconciliation Outreach, an inner city life rehabilitation program providing a safe haven and Christian discipleship for homeless and needy men, women and children in East Dallas. She was also founding pastor of Reconciliation Church. Dorothy received the Unsung Heroines Award from Senator Kay Bailey Hutchison during a ceremony at the Nation’s Capitol (1999) and The God’s Leading Ladies Legacy Award from Serita Jakes and The Potter’s House (2005). She has also appeared as a guest on TBN, several local television and radio programs, and been featured in numerous publications and a feature article in Charisma Magazine. Dorothy is also listed in the Heritage Registry of Who’s Who. Dorothy and her husband, Bob, reside in Denton, Texas, and are the parents of four adult children.

Book Description BookSurge Publishing, 2007. Paperback. Condition: Good. Connecting readers with great books since 1972. Used books may not include companion materials, some shelf wear, may contain highlighting/notes, may not include cdrom or access codes. Customer service is our top priority!. Seller Inventory # S_223049349

Book Description CreateSpace Independent Publishing Platform. Paperback. Condition: Very Good. A copy that has been read, but remains in excellent condition. Pages are intact and are not marred by notes or highlighting, but may contain a neat previous owner name. The spine remains undamaged. At ThriftBooks, our motto is: Read More, Spend Less. Seller Inventory # G1419661906I4N00

Book Description BookSurge Publishing, 2007. Paperback. Condition: Good. Connecting readers with great books since 1972. Used books may not include companion materials, some shelf wear, may contain highlighting/notes, may not include cdrom or access codes. Customer service is our top priority!. Seller Inventory # S_279692274