Items related to A Thousand Turns: An Autobiography from the Depression...

Merritt, Douglas N. A Thousand Turns: An Autobiography from the Depression to Submarine Combat in the War with Japan

A Thousand Turns: An Autobiography from the Depression to Submarine Combat in the War with Japan 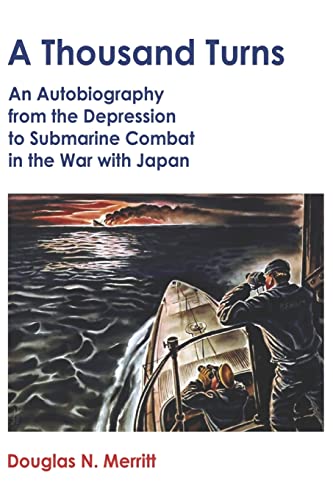 Douglas N. Merritt takes us through his childhood of farm work and cross-state bicycle rides and train-hopping to scratching out a living during the Depression as a young adult and finally hunting the Emperor's ships in the Pacific during World War II.

Turn back the clock--a thousand turns--to a time and a world that exist only in memory, a world that gave birth to the one we know today.

A Thousand Turns: An Autobiography, from the Depression to Submarine Combat in the War with Japan is our passport to the Great Depression and World War II as they have never been chronicled before. Only John Steinbeck in Travels with Charley had given us so rich a tour of the United States and its people. Now Douglas N. Merritt joins him as one of those rare individuals who so exactingly preserve the very feel of his times for posterity.

We readers help with the suitcases in his family's many moves -- made necessary after his father robbed a bank. We toil alongside a young Douglas on his grandfather's farm in the depths of the Great Depression. We pedal with him at age 12 as he bicycles from the northeastern corner of Kansas to south-central Oklahoma. We hop trains and sleep in hobo jungles with him, earning a dime here and there, or simply food to survive on. And before the journey ends, we go down to the sea in submarines to hunt the emperor's merchant ships in the Pacific--and are hunted in turn.

What Ralph Waldo Emerson wrote in The Poet is true of Douglas Merritt's story: "He will tell us how it was with him, and all men will be the richer in his fortune."

A Thousand Turns: An Autobiography, from the Depression to Submarine Combat in the War with Japan is a magnificent panorama of memoir, reliving for us the education of a boy into manhood during the 20th Century's most desperate decades.

A week later the Japanese convoy came back. I do not know for sure that it was the same convoy but the information we had and the count we got was consistent with that surmise. The problem then was a terrible storm. The seas were at least force six with tremendous waves and wind-thrown water, and it was raining fiercely. It was nearly daylight and we were on the surface charging the batteries and searching with radar. We were trying to maintain our station while coping with the waves by keeping our bow to the wind out of the northeast. We maintained as slow a speed as possible and still steer. Anything more would have drowned the people on the bridge.

The convoy was first picked up on radar south of us and coming fast, heading a bit to the east of us. The plot showed no zigs and steady high speed. I was the officer of the deck with three lookouts and sometimes a quartermaster. The captain, to get ahead of the targets, ordered standard speed and turned east. The ship began plunging into the waves and taking solid water over the bridge. That means green water was hitting me, and the lookouts even moreso, with pounding blows. We could not continue without losing someone over the side. The lookouts were in perilous positions, especially the after lookout, who had precious little to hang on to. I ordered him below. There was nothing to see anyway and one wave could sweep him over the side with no chance of our getting him back. Within minutes I sent the other two men below as well.

That left me alone for the quartermaster had earlier found other necessary duties in the conning tower. Smart man, you know; that's the kind they pick for quartermaster. I had some protection that the lookouts didn't have; if I alertly timed the oncoming waves I could duck under the cowling into a space protected by metal. I was drenched, of course, but should not get swept overboard. A serious problem was that the waves were not regular. The combination of wind direction, a different wave direction and our course brought the waves over sometimes unexpectedly. I needed to hang on tightly. Luckily I never lost my footing. Shortly after I sent the men below the water began cascading down the conning tower hatch. The captain ordered it closed.

I was alone. I was terribly alone. True I had a microphone-speaker and could communicate with those inside, but somehow it isn't quite the same as being inside. It was rainy, dismal, semi-dark and blowing like hell. An enemy fleet was rapidly approaching, I was clinging to a submarine which I knew could dive out from under me in 45 seconds leaving me in the middle of the South China Sea. I knew that the skipper would not forget I was there if in fact I was yet still there when he wanted to dive, but I also knew that if a Japanese destroyer was bearing down, the safety of the ship would come first. Today, when I am asked if it wasn't frightening being in a submarine, I can honestly say it is not nearly so frightening as not being in one.

I took a physical beating by the smashing waves that I could not avoid but it didn't last very long because the convoy caught up with us quickly. Captain Icenhower decided to attack, and ordered battle stations. They opened the hatch for me and I went below, switching from officer of the deck to diving officer. We submerged near their track when they came close. We had decided they were warships (we wouldn't dare be on the surface against big guns). The skipper thought there was a carrier and two cruisers with some number of destroyers. He had a firing bearing on the TDC (torpedo data computer) and zeroed in on the big one.

1. A Thousand Turns: An Autobiography from the Depression to Submarine Combat in the War with Japan