Items related to THE KEY TO MY CHILDREN SERIES: HANNAH CAN TALK WITH...

Surgoth, Susan THE KEY TO MY CHILDREN SERIES: HANNAH CAN TALK WITH HER HANDS

THE KEY TO MY CHILDREN SERIES: HANNAH CAN TALK WITH HER HANDS 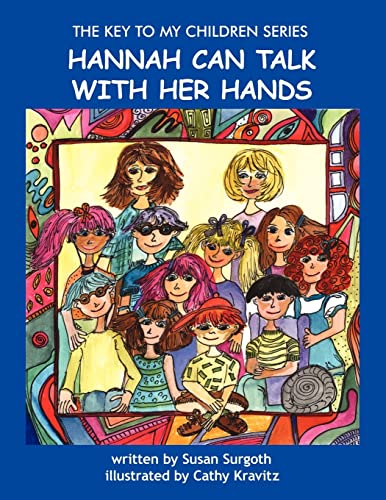 THE KEY TO MY CHILDREN: HANNAH CAN TALK WITH HER HANDS is about a four year old little girl who uses sign language to communicate, or, as Miss Susan and Miss Nancy say, "she talks using her hands not her voice". The teachers expect Hannah to talk someday, but until then, they have taught her sign language. Feeling powerful in her world can minimize frustration and enable her to learn. After the other students see the power of sign language, they are excited to learn it themselves. It also helps the other children realize Hannah is learning and that they can understand her now if they learn some simple signing words. Hannah's key to learning is sign language. Hannah has a lable of Mild Mental Disability.

AUTHOR - SUSAN SURGOTHSusan Surgoth is an Early Childhood teacher and a Developmental Therapist in the state of Indiana. She received her undergraduate degree in Elementary Education with an endorsement in Special Education from Indiana University, Bloomington, Indiana. She earned her Masters degree from Butler University in Indianapolis.Susan began teaching special needs children at the junior and senior high level. She then worked as a Secondary Coordinator for a Special Services Cooperative consisting of seven school corporations.Some years later she worked for the Indiana Department of Education, Division of Special Education as an Area Coordinator. However, she quickly learned she was getting too far removed from the thing she loved the most: the children. She then accepted a job as the Preschool Data Collection Coordinator, with a promise of returning to teaching when the State of Indiana became mandated to provide education for developmentally delayed preschoolers three years later. Little did she know she would find her passion in life. Besides her family of three children and husband, teaching developmentally delayed preschoolers is her blessing."After years of heart-warming experiences, I decided I had to find a way to share the children with others. I began writing down rewarding moments and finally decided to invite people into my classroom by writing a series of children's books. After finding just the right illustrator, my adventure began."ILLUSTRATOR - CATHY KRAVITZCathy Kravitz is originally from Colorado and has been living in Carmel, Indiana for the past 20 years. She is married and has 2 grown children. Cathy began her career in elementary education until her children were born, at which time she became an artist. She has taught art classes for the past 18 years as well as established her own business Creative Arts by Cathy. Cathy primarily works in clay and has sold pieces throughout the world. She has exhibited in New York City as well as many l

1. THE KEY TO MY CHILDREN SERIES: HANNAH CAN TALK WITH HER HANDS

2. THE KEY TO MY CHILDREN: HANNAH CAN TALK WITH HER HANDS