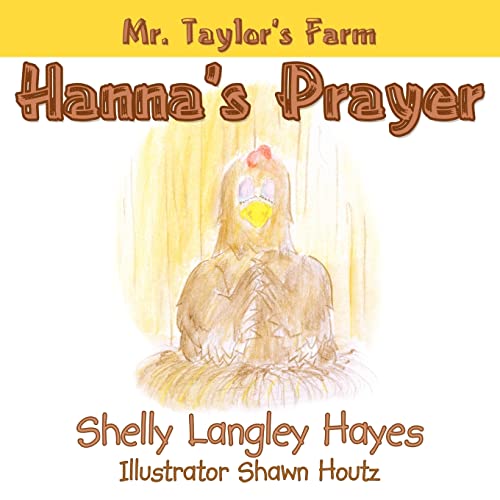 Hanna's Prayer is the first in a series called Mr. Taylor's Farm. Hanna is a chicken on Mr. Taylor's farm. Hanna wants to be a mom more than anything. Year after year all of the hens on Mr. Taylor's farm have baby chicks. Hanna sits alone to pray 'God, Please just let just egg hatch, just one'. Hanna finds herself again the favorite aunt to everyone else's chicks with no baby chick of her own. God has plans for all of us and as Hanna learns, God answers prayers in his time. God does know what is best for all of us.

ABOUT THE AUTHOR Hanna's Prayer is my first published book. I have written others for a series called Mr. Taylor's Farm. Hanna's Prayer being the first in that series. I am the mother of one son, two step-daughters and grandmother of three. For many years I was the aunt to many nieces and nephews but no babies of my own. Hanna's Prayer was at that time my prayer. My son Brandon is God's answer to my prayer. My love of children and my love for my Brandon is my inspiration for the book called Hanna's Prayer. ABOUT THE ILLUSTRATOR Shawn is an art major attending Adrian and Kellogg Community College for the past two years. As a devoted artist has completed various projects, this being his first published and first attempted illustration. In the next few years to follow, Shawn plans on finishing his art education degree; and begin teaching his own art students to broaden the aspects of art to the aspired.