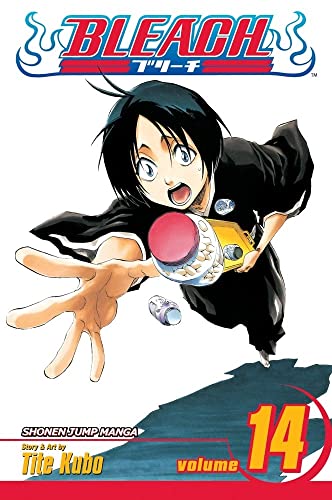 Cleaning up the afterlife – one spirit at a time!

R to L (Japanese Style). Cleaning up the afterlife – one spirit at a time!

Ichigo Kurosaki never asked for the ability to see ghosts - he was born with the gift. When his family is attacked by a Hollow, a malevolent lost soul, Ichigo becomes a Soul Reaper, dedicating his life to protecting the innocent and helping the tortured spirits themselves find peace. Find out why Tite Kubo's Bleach has become an international manga smash-hit!

The race to save Rukia from the Soul Society is officially on, and Ichigo and company have come to their first roadblock, a very, very big roadblock. Jindanbô, the monstrous, fez-sporting gatekeeper hasn't let a single soul enter the Western Gate he guards in over 300 years, and he isn't about to change his mind about it just because Ichigo's crew wants to go through either. But, in a where-the-rubber-meets-the-road kind of way, Ichigo wasn't expecting his assault on the Soul Society to be a piece of cake either. After all, that'd just be boring.

White Tower Rocks: Ichigo and Yoruichi race to save Ichigo's friends from Rukia's cold-blooded brother, Byakuya Kukichi. They arrive to find Ganju in tatters, and Rukia with him. Ichigo is bent on defeating her brother this time, but he is nowhere near prepared. Can he learn decades' worth of skill in just a matter of days?

Bleach is author Tite Kubo's second title. Kubo made his debut with ZombiePowder, a four-volume series for Weekly Shonen Jump. To date, Bleach has been translated into numerous languages and has also inspired an animated TV series that began airing in Japan in 2004. Beginning its serialization in 2001, Bleach is still a mainstay in the pages of Weekly Shonen Jump. In 2005, Bleach was awarded the prestigious Shogakukan Manga Award in the shonen (boys) category.

Book Description Paperback. Condition: New. Paperback. R to L (Japanese Style). Cleaning up the afterlife ? one spirit at a timeIchigo Kurosaki never asked for the ability to see ghosts - he was born with the gift. When his family is attacked .Shipping may be from multiple locations in the US or from the UK, depending on stock availability. 192 pages. 0.308. Seller Inventory # 9781421506128