Items related to The Wisdom of Father Brown

The Wisdom of Father Brown 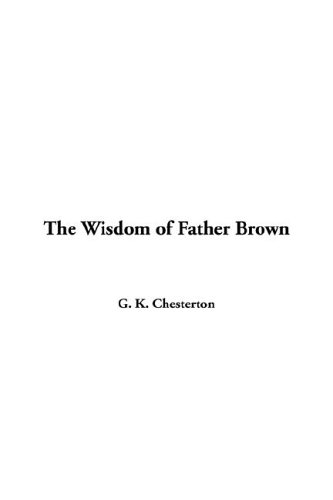 Father Brown is a fictional character created by English novelist G. K. Chesterton, who appears in 50 short stories. Father Brown’s powers of detection allow him to sit beside the immortal Sherlock Holmes but he is also, to quote Rufus King, ‘in all senses a most pleasantly fascinating human being’. You will be enchanted by the scandalously innocent man of the cloth, with the umbrella, who exhibits such uncanny insight into ingeniously tricky human problems. Contains the following 12 stories; The Absence of Mr Glass The Paradise of Thieves The Duel of Dr Hirsch The Man in the Passage The Mistake of the Machine The Head of Caesar The Purple Wig The Perishing of the Pendragons The God of the Gongs The Salad of Colonel Cray The Strange Crime of John Boulnois The Fairy Tale of Father Brown

Gilbert Keith Chesterton was born in London, England, in 1874. He went on to study art at the Slade School, and literature at University College in London. Chesterton wrote a great deal of poetry, as well as works of social and literary criticism. Among his most notable books are "The Man Who Was Thursday", a metaphysical thriller, and "The Everlasting Man", a history of humankind's spiritual progress. After Chesterton converted to Catholicism in 1922, he wrote mainly on religious topics such as "Orthodoxy" and "Heretics". Chesterton is most known for creating the famous priest-detective character Father Brown, who first appeared in "The Innocence of Father Brown". Chesterton died in 1936 at the age of 62.