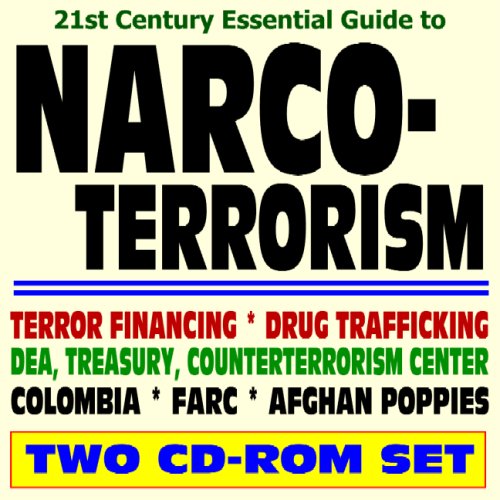 This up-to-date and comprehensive electronic book on two CD-ROM discs presents a vital collection of important documents, reports, and files about narco-terrorism and related topics: terror financing, drug trafficking, Colombia drug cartels, FARC, Afghan poppy production, money laundering, counter-terrorism, asset blocking, forfeiture, and more. There are reproductions of documents from the U.S. Government, including the DEA (Drug Enforcement Agency), National Counterterrorism Center, Immigration and Customs Enforcement (ICE), U.S. Department of Treasury Foreign Assets Control, House of Representatives, Department of Defense, White House, and much more. A narco-terrorist organization is an organized group that is complicit in the activities of drug trafficking to further or fund premeditated, politically motivated violence to influence a government or group of people. Although the DEA does not specifically target terrorists, some of the powerful international drug trafficking organizations targeted have never hesitated to use violence and terror to advance their interests. DEA has identified seventeen Foreign Terrorist Organizations, as designated by the Department of State, with potential ties to the drug trade. More generally, drugs and terror frequently share a common ground of geography, money, and violence. "The War on Terror and the War on Drugs are linked," a high ranking DEA official told the Senate Judiciary Committee. "Thirty-nine percent of the State Department's current list of designated foreign terrorist organizations have some degree of connection with drug activities," he said. Steven Casteel, Assistant DEA Administrator for Intelligence, said that "whether a group is committing terrorist acts, trafficking drugs or laundering money, the one constant to remember is that they are all forms of organized crime." Mr. Casteel told the Committee members that three terrorist organizations in Colombia, all of them with links to the drug trade, were responsible for about 3,500 murders. One of those organizations, the Revolutionary Armed Forces of Colombia (FARC), "directly trades cocaine for weapons and in other instances funds weapons purchased with cash derived from cocaine sales," he said. Established in 1964 as the military wing of the Colombian Communist Party, the Revolutionary Armed Forces of Colombia (Fuerzas Armadas Revolucionarios de Colombia, FARC) is Latin America's oldest, largest, most capable, and best equipped insurgency of Marxist origin-although it only nominally fights in support of Marxist goals today. The FARC primarily operates in Colombia, with some activities-extortion, kidnapping, weapons sourcing, and logistics-in neighboring countries. Tactics include bombings, murder, mortar attacks, kidnapping, extortion, and hijacking, as well as guerrilla and conventional military action against Colombian political, military, and economic targets. Governments find themselves faced with classic terrorist groups that participate in, or otherwise receive funds from, drug trafficking to further their agenda. Consequently, law enforcement may seek to distinguish whether narco-terrorists are actual drug traffickers who use terrorism against civilians to advance their agenda, or principally terrorists who out of convenience or necessity, use drug money to further their cause. The label of narco-terrorist may be equally applicable to both groups. One of the most infamous "narco-terrorists" was Pablo Escobar. As leader of the Medellin cocaine cartel in Colombia, he became one of the wealthiest and most feared men in the world. At the height of his success. Afghanistan is a major source country for the cultivation, processing, and trafficking of opiates, producing 59 percent of the world's supply of illicit opium.

This CD-ROM disc set is packed with over 49,000 pages reproduced using Adobe Acrobat PDF software - allowing direct viewing on Windows and Macintosh systems. The Acrobat cataloging technology adds enormous value and uncommon functionality to this impressive collection of government documents and material. This CD-ROM uses next-generation search technology that allows complete indexing and makes all files on the disc fully searchable. Our news and educational discs are privately compiled collections of official public domain U.S. government files and documents - they are not produced by the federal government. They are designed to provide a convenient user-friendly reference work, utilizing the benefits of the Adobe Acrobat format to uniformly present thousands of pages that can be rapidly reviewed, searched by finding specific words, or printed without untold hours of tedious research and downloading. Vast archives of important public domain government information that might otherwise remain inaccessible are available for instant review no matter where you are. This book-on-a-disc format makes a great reference work and educational tool. There is no other reference that is as fast, convenient, comprehensive, thoroughly researched, and portable - everything you need to know, from the federal sources you trust.