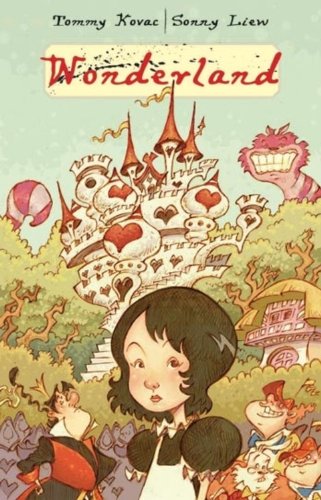 Among the numerous curiosities that have gone unexplained in the classic tale Alice in Wonderland, perhaps the most perplexing might be who, exactly, is the “Maryann” that the White Rabbit mistakes Alice for at the beginning of the story? Lewis Carroll first made us ponder this and, years later, Walt Disney again made viewers wonder who Maryann might be in his classic feature length film based on Carroll’s book.

Now, the amazingly talented folks at SLG Publishing, through a licensing deal with Disney, have finally answered this age-old question. In their beautifully executed comic book series, WONDERLAND, readers experience Alice’s fantastic world as they’ve never seen it before. Writer Tommy Kovac’s Wonderland is missing Alice herself, but it’s still populated by the other characters that make the world such a curiously exciting place. The Queen of Hearts is present, barking orders to lop off people’s heads, as is the Cheshire Cat, the White Rabbit, the Mad Hatter and the rest of Wonderland’s beloved cast. And there are some new faces, too, including the book’s main protagonist, the mysterious Maryann herself. All are beautifully illustrated by Wonderland’s artist, Sonny Liew.

The graphic novel will collect the six issues that comprised the Wonderland comic series in a beautiful, collectible, jacketed hardcover edition.

About the Author:
Tommy Kovac writes and draws the beautiful comic Autumn for SLG Publishing. As a boy he'd play chess against himself and hide out in a "rabbit hole" his father dug for him in the backyard. He lives near Disneyland, and has a dog named Mr. Scoots.

Sonny Liew's comics piece Malinky Robot earned him a Xeric Grant, and he followed it up with "Dead Soul's Day Out" and "Malinky Robot: Bicycle," a graphic novella published by SLG. Sonny lives in Singapore trying to think up new Malinky Robot stories, while muddling his way through the rest of life. He has worked for DC Comics' Vertigo imprint, Image, and Vivendi Universal.
From Publishers Weekly:
This wonderful graphic novel offshoot from Lewis Carroll's Alice in Wonderland need not worry those concerned about some crass Disney effort to strip-mine yet more revenue out of a beloved children's classic. Author Kovac and artist Liew's six-chapter novel is a droll and urbane imagining of the story behind a very minor character from Carroll's tale: Mary Ann, the White Rabbit's maid, who was mistaken for Alice. In Kovac's telling, dark-haired Mary Ann is a compulsive cleaner and follower of rules, who cares not a whit for the legendary Alice monster, as everyone terms the rebellious blonde, whom Mary Ann sees as little more than a back-talking, stuck-up little prat. Mary Ann tromps through Liew's lusciously colored landscapes, encountering all the expected characters (Cheshire Cat, Mad Hatter, Jabberwock) and getting into trouble with most of them. Although the mood is correctly tea party surreal, Kovac manages to add in unexpected elements, from courtly intrigue to fanaticism (Alice even has her own cult, known as the Curious), while never losing track of Carroll's hyperactive gamesmanship. It's a rare piece of literature that's been inspired by another yet deserves its own prideful place on the bookshelf. (Mar.)
Copyright © Reed Business Information, a division of Reed Elsevier Inc. All rights reserved.