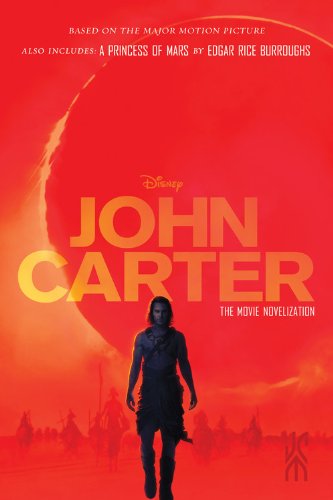 This adaptation will not only give readers an amazing novelization of the upcoming John Carter film, but also the original text of A Princess of Mars, by Edgar Rice Burroughs. A Princess of Mars was the first book to feature John Carter, led to an eleven-book series featuring his adventures, and was also the basis for the 2012 movie!
The movie John Carter tells the story of a war-weary former military captain during the Civil War, who is inexplicably transported to Mars. He quickly (and reluctantly) becomes embroiled in a conflict of epic proportions amongst the inhabitants of the planet. The adaptation, written by Stuart Moore, wonderfully brings the movie's otherworldly action and adventure to the page, while keeping the themes of family, planetary survival, and loyalty at heart.

Stuart Moore has been a writer, a book editor, and an award-winning comics editor.

He was a founding editor of DC's Vertigo imprint, and has also edited the Marvel Knights and Virgin Comics/SciFi Channel comics lines. Stuart lives in Brooklyn, New York with his wife, author Liz Sonneborn, and two of the most spoiled cats on the planet.
Edgar Rice Burroughs, 1875-1950

Edgar Rice Burroughs is renowed for his many novels of fantastic adventure. Unquestionably his best-known creation is that of the jungle hero, Tarzan the Ape Man, but almost as well known are his stories of other planets beginning with the very popular Mars series. A torrent of novels followed: stories about Venus, tales of the Moon and of the middle Earth, westerns, and detective stories. In all, nearly one hundred stories bore Edgar Rice Burroughs' name.

Born in Chicago in 1875, he tried his hand at many businesses without notable success, until at the age of thirty-five, he turned to writing. With the publication of Tarzan of the Apes and A Princess of Mars, his career was assured. By the time of his death in 1950, at his home in a town bearing the name of his best known work, Tarzana, California over 40 million copies of Edgar Rice Burroughs books have appeared in 58 different languages.