Items related to House of Hades, The (Heroes of Olympus, The, Book Four,...

House of Hades, The (Heroes of Olympus, The, Book Four, Special Limited Edition) 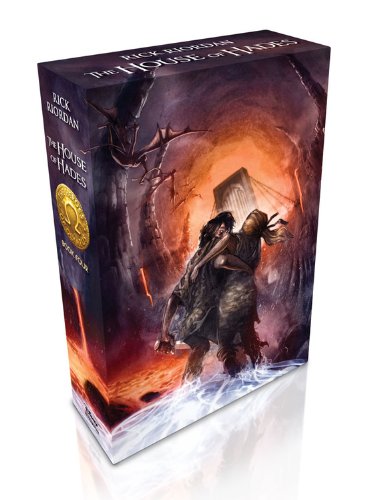 Just in time for holiday gift-giving, this signed and numbered limited edition of The House of Hades is the perfect keepsake for fans of the #1 New York Times bestselling series. Each book is hand-signed by Rick Riordan and includes specially commissioned art from series illustrator  John Rocco. The deluxe slipcase features a wrap-around illustration and makes an elegant centerpiece for any bookshelf.

Rick Riordan (www.rickriordan.com) is the author of The Heroes of Olympus, Book One: The Lost Hero; the New York Times #1 best-selling The Kane Chronicles, Book One: The Red Pyramid; as well as all the books in the New York Times #1 best-selling Percy Jackson and the Olympians series: The Lightning Thief; The Sea of Monsters; The Titan's Curse; The Battle of the Labyrinth; and The Last Olympian. His previous novels for adults include the hugely popular Tres Navarre series, winner of the top three awards in the mystery genre. He lives in San Antonio, Texas, with his wife and two sons.


John Rocco (www.roccoart.com) studied illustration at Rhode Island School of Design and The School of Visual Arts. In addition to writing and illustrating four of his own picture books, including the Caldecott Honor-winning and New York Times bestselling Blackout, he has created all of the cover art for Rick Riordan's best-selling Percy Jackson, Kane Chronicles, and Heroes of Olympus series. He has also illustrated books by Whoopi Goldberg and Katherine Patterson. Before becoming a full-time children's book creator, he worked as an art director on "Shrek" for Dreamworks, and for Disney Imagineering. He lives in Los Angeles with his wife and daughter.

PRAISE FOR THE HOUSE OF HADES
"In this adventure, victories are hard-won and the essence of bravery nuanced, making the journey as satisfying as it is entertaining." "Kirkus""

PRAISE FOR THE HOUSE OF HADES
"Fans won't be disappointed as the cliff-hanger ending from the previous book, The Mark of Athena, leads to further exciting adventures by the intrepid demigods. . . As Annabeth and Percy struggle to survive Tantarus's poisonous atmosphere and creatures, the other demigods must undergo harsh trials. . . but they learn and grow mentally and physically from their experiences. The heroes realize that they cannot change their parentage but they can control their legacy. Fans will be thrilled to know the series continues with The Blood of Olympus in 2014." "School Library Journal""

PRAISE FOR THE LOST HERO
"Readers longing for a return to Camp Half-Blood will get their wish . . . the action scenes come frequently as the three heroic teens fight monstrous enemies in North American locales . . . Flashes of humor lighten the mood at times, but a tone of urgency and imminent danger seems as integral to this series as the last. With appealing new characters within a familiar framework, this spin-off will satisfy the demand for more." "Booklist""

PRAISE FOR THE SON OF NEPTUNE
"Fans will find plenty to cheer about as Percy and his allies move slowly toward fulfilling the mysterious Prophecy of Seven." "Kirkus Reviews""

PRAISE FOR THE HOUSE OF HADES
"Adventure fans will relish the action as their heroes confront formidable foes, while readers who have come to love the characters will enjoy following the different individuals as they take the stage in scenes that are usually dramatic, often witty, and occasionally surprising. A satisfying, penultimate entry in the Heroes of Olympus series." "Booklist Online""