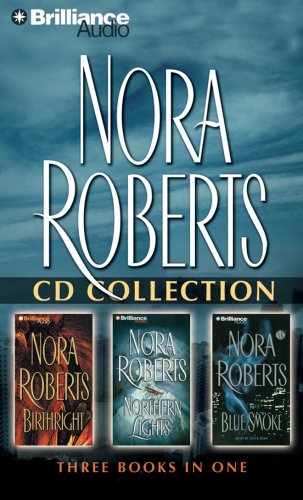 Birthright
Recruited for her expertise on an Antietam Creek dig, archaeologist Callie Dunbrook encounters danger—as a cloud of death and misfortune hangs over the project. She finds a passion that feels equally dangerous, as she works with her irritating, but irresistible, ex-husband, Jake. And when a strange woman approaches her, claiming to know a secret about Callie’s privileged Boston childhood, some startling and unsettling questions are raised about her very identity.

Northern Lights
With nowhere else to go, Nate Burke accepts the job as Chief of Police in a tiny, remote Alaskan town. Meg Galloway, born and raised in Lunacy, has learned to be independent. After her New Year’s kiss with the Chief of Police, she allows herself to give in to passion. And now, things in Lunacy are heating up. Years ago a crime occurred—and Nate suspects that a killer still walks the snowy streets.

Blue Smoke
The blaze that night at her family’s pizzeria changed young Reena Hale’s life in more ways than one. As Reena gazed into the fire, her destiny began to take shape. She would study, struggle, and walk the gauntlet to one day become an investigator herself. But she is not the only one fascinated by the flames. Someone else is obsessed not with conquering the fire but with controlling it, owning it, using it to exact vicious revenge....

Nora Roberts is the #1 New York Times bestselling author of more than 200 novels. She is also the author of the bestselling In Death series written under the pen name J. D. Robb. There are more than 500 million copies of her books in print.