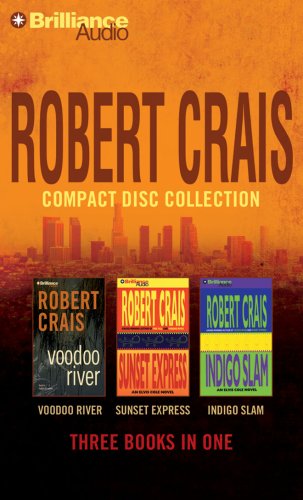 L.A. private eye Elvis Cole is hired by popular television star Jodie Taylor to delve into her past and identify the biological parents who gave her up for adoption thirty-six years before. But when Cole gets to Louisiana and begins his search, he finds out there's something much darker going on. Other people are also looking for Taylor's parents, and some are ending up dead.

Elvis Cole, wisecracking private eye, finds himself embroiled in a controversial L.A. murder case. A wealthy WASP entrepreneur appears to have murdered his wife. A hot-shot defense attorney takes the case and hires Elvis to find proof that the L.A. detective—rumored to be dirty—fooled around with the evidence. But as Elvis investigates, he becomes more suspicious of the media-loving lawyer than the cops.

When a 15-year-old girl shows up to plead with Elvis to find her errant father, his first impulse is to hand the case over to Social Services. But he sees how hard the kid is working to keep her two siblings together and afloat. As Elvis investigates, he finds the dad seems to be a mover in the criminal underworld who is on the verge of a grand scheme. Events are set in motion that will pit Elvis and Joe Pike against a scary group of counterfeiters—and the even scarier U.S. Marshals.

Robert Crais is the 2006 recipient of the Ross Macdonald Literary Award. He is the author of numerous New York Times bestsellers, including The Two Minute Rule, The Forgotten Man, and L.A. Requiem.

Book Description Brilliance Audio, 2007. Audio CD. Condition: Good. Connecting readers with great books since 1972. Used books may not include companion materials, some shelf wear, may contain highlighting/notes, may not include cdrom or access codes. Customer service is our top priority!. Seller Inventory # S_280454131