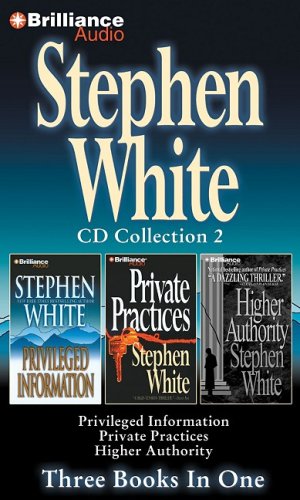 Privileged Information: Alan Gregory is a clinical psychologist with a thriving practice in Boulder, Colorado. His life begins to unravel when one of his female patients is found in an apparent suicide and the local paper begins printing accusations from an unnamed source of sexual impropriety between the woman and Dr. Gregory. The question of privileged information becomes crucial as the psychologist pursues an unsettling romance with Lauren Crowder, a lovely deputy district attorney. Private Practices: Dr. Alan Gregory is a practicing psychologist with a few little problems to work through. He has an office filled with bloody corpses. He has a teenage patient who may be a sad victim or a savage killer. He has a beautiful estranged wife who wants him back in the worst way, and a lovely lover doing her best to keep him. He has a cop who wants him off the case, and an unknown enemy who wants him permanently out of action. Higher Authority: The sudden death of Utah's Senator Orrin Hatch propels his successor, Lester Horner, to become the first Mormon associate justice of the U.S. Supreme Court. Carried along with Horner is Blythe Oaks, an ambitious and intelligent woman who is also Horner's favorite law clerk and fellow Mormon. But Blythe's reputation is threatened when a female former employee accuses her of sexual harassment and career sabotage. Since Blythe's accuser happens to be Lauren Crowder's kid sister, Lauren plunges into the case.

Stephen White is a clinical psychologist and the New York Times bestselling author of sixteen novels, including Kill Me and Dry Ice. He lives in Colorado.