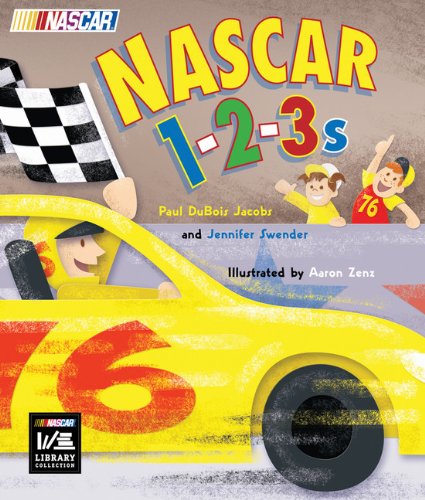 The nuts and bolts of NASCAR in a counting book full of racecars
Counting by ones, tens, and hundreds, young NASCAR fans can practice their numbers while racing around the track at top speed. They will learn what a "front runner" is and how many crew members it takes to make car adjustments during a pit stop. But best of all, they'll chase the cars around the track. By the time young readers cross the finish line in the book, they'll feel like NASCAR winners!
Readers, start your engines. 1-2-3! Rev up your NASCAR numbers with me! Count ONE driver-nerves made of steel. Count TWO gloves-gripping the wheel . . . Count SEVEN crew members-ready to jump. Count EIGHT cylinders-starting to pump . . . Keep on digging-safely 'round the bend. Let's keep counting-now by tens! . . . FIFTY greatest drivers. Count yourself in! Count SIXTY years-since the first NASCAR win . . . Shut down your engine. The race is done. In NASCAR numbers-you're number ONE!
Author Bio Paul DuBois Jacobs and Jennifer Swender are a husband-and-wife writing team who live in Brooklyn, New York. They are the authors of five other Gibbs Smith books: Children's Songbag, Putting on a Play, My Taxi Ride, NASCAR ABCs, and the award-winning My Subway Ride.
Illustrator Bio Aaron Zenz lives in Spring Lake, Michigan. He illustrated NASCAR ABCs (Gibbs Smith) and the "I Can Read" Howie series, and wrote and illustrated The Hiccupotamus. To find out more about Aaron's work, go to www.aaronzenz.com.

Count NINE front-runners-pulling into place.
Count TEN races-in the championship chase.
Just keep counting-safely 'round the bend.
Let's keep counting-now by tens!
VROOM, vroom, VROOM! Race cars are revving their engines in NASCAR 1-2-3s! Jump in your race car and fasten your seat belt, because another race is about to begin! From counting STICKERS and MILES PER HOUR to RECORDS THAT RULE in ones, tens, and hundreds, little NASCAR fans can learn the ins and outs of NASCAR as they race through their numbers! Hold on tight, because these NASCAR kids will pick up counting speed in record time, zooming past the checkered flag for a NASCAR 1-2-3s victory!
Shut down your engine. The race is done.
In NASCAR numbers-you're number ONE!
Paul DuBois Jacobs and Jennifer Swender's books include NASCAR ABCs, My Taxi Ride, My Subway Ride, Children's Songbag, and Putting on a Play. Paul has also coauthored four books with musician Pete Seeger: Abiyoyo Returns, Pete Seeger's Storytelling Book, Some Friends to Feed, and Deaf Musicians, winner of the ALA's 2007 Schneider Family Book Award. Jennifer is a veteran elementary school teacher and curriculum writer. They live in Massachusetts with their daughter and their old car, Lickety Split. Visit Paul and Jennifer's Web site at www.JacobsandSwender.com.
Aaron Zenz shifts gears between fine art, graphic design, multimedia design, toy design, and illustration. He and his groovy wife, Amity, have parked themselves in West Michigan where they never tire of keeping track of a whole truckload of kids. Zenz has illustrated NASCAR ABCs and the "I Can Read" Howie series, and wrote and illustrated The Hiccupotamus. Race over to www.AaronZenz.com on the information superhighway for more about his art and writing.

Aaron Zenz lives in Spring Lake, Michigan. He illustrated NASCAR ABCs (Gibbs Smith) and the "I Can Read" Howie series, and wrote and illustrated The Hiccupotamus.