Items related to Moon in Grundy Center: Struggles of a Disfigured Boy

Moon in Grundy Center: Struggles of a Disfigured Boy 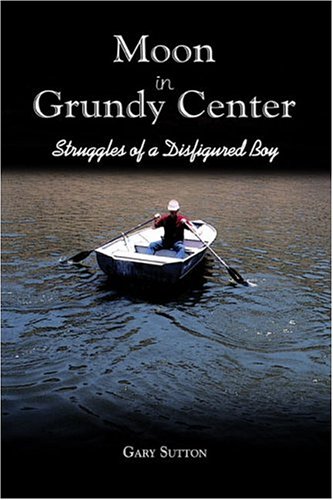 Girls. College. Cars. The innocence and evil of 1956 in Grundy Center, Iowa. "A beautifully crafted story of humanity and outright cruelty. "You don't have to be special to someone to survive. I guess," observes Moon, the endearing protagonist-narrator of Sutton's first novel, as he desperately tries to convince himself that solitary living is tolerable. Much of Moon's story, a touching bildungsroman set largely in rural Iowa in the mid-1900s, centers on his efforts to blend into a society that constantly seeks to ostracize him because of his distractingly crescent-shaped head. In her efforts to conceal a pregnancy out of wedlock, Moon's mother wears a girdle so late in her term that her son comes into the world with the double burden of a misshapen head and being born a bastard to a practicing Methodist family. Moon earns his nickname early in life, nastily bestowed upon him by the daughter of the vilely sanctimonious Dr. Throckmorton, who gives Moon his first bitter tastes of discrimination. Though not a groundbreaking premise-a physical deformity spurs superhuman inner growth-Sutton's novel is engaging and heartfelt without becoming preachy. Moon's voice is plain yet witty, and evenly controlled throughout a narrative studded with as many episodes of blunt hardship as nuanced vignettes highlighting the subtleties of human interaction. A telling example of Moon's affinity for discerning irony comes early on as he describes the trials of life on a family farm: "If just a few of their animals died, the farmer was halfway to the poorhouse. Yet if he ever fell down in the hog pen, those animals would eat him in minutes. I always wondered who was working for whom." Moon's ingenuity and dauntless spirit in the face of Herculean challenges will instantly win over adults and children alike. The transformative power of Moon's character drives this empathetic tale." -Kirkus Discoveries. "This is a Huckleberry Gump story. But true," Allan Shaw. "In a quiet way, with events that are so convoluted that they cannot be false, Moon in Grundy Center reveals what our species is like, while entertaining," Rachel Spector. "This is an important book," Ed Tuck.

1. Moon in Grundy Center: Struggles of a Disfigured Boy

Book Description Publishamerica Inc 2006-01-30, 2006. Paperback. Condition: Good. Item is in good condition. Some moderate creases and wear. This item may not come with CDs or additional parts including access codes for textbooks. Might be an ex-library copy and contain writing/highlighting. Seller Inventory # DS-1424114918-3

2. Moon in Grundy Center: Struggles of a Disfigured Boy