Items related to The Puzzle of Dickens's Last Plot

The Puzzle of Dickens's Last Plot 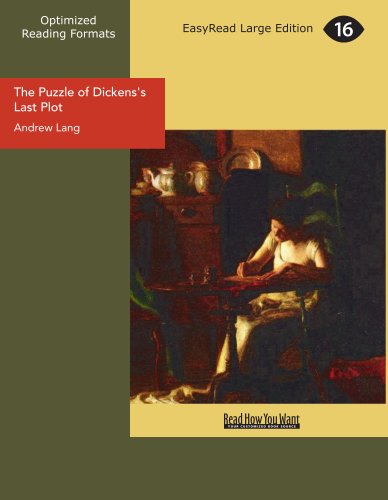 This is a vigorous investigation of Dickenss last book which remained unfinished due to his death. Lang, while facilitating other theories, endeavors to solve The Mystery of Edwin Drood. A conspicuous portrayal of Langs analytical supremacy, in which he superbly represents assorted notions in alliance with his own that help readers to form their own perspective. An indicative exposition!

Born at Selkirk, Andrew Lang is best remembered for his collections of folk and fairy tales, but he published poetry, literary criticism, and historical non - fiction as well. He was also a journalist and an anthropologist. Lang's interest in the history and literature of Scotland inspired most of his major works, includingMyth, Ritual and Religion (1887) and the many fairy tale collections that he produced.

1. The Puzzle of Dickens's Last Plot