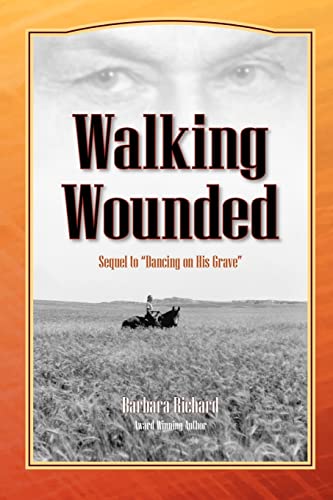 Continuing the incredible true story of five sisters and their mother, introduced in Dancing on His Grave as they escape their psychopathic father and move into adulthood. A page turner.

Barbara Richard lived for eighteen years on a hard-scrabble farm/ranch in eastern Montana. After high school graduation, she attended beauty school and, at age nineteen, opened her first business. In 1982 she formed a corporation for the purpose of assisting small Montana cities and towns develop community and economic development projects. Five years ago, after twenty years of consulting that garnered over fifty million dollars in funding for her clients, Ms. Richard retired as president of the corporation and began the completion of her family's story, a memoir she had begun writing in 1982, shortly after her father=s death. Started with Dancing on His Grave, and continuing with the sequel, Walking Wounded the story is now projected to comprise a trilogy. The third book will explore family history back to the late 1800s, in an attempt to identify factors that could have helped create such a monster. An insatiable reader, Ms Richard read more than a thousand books before graduating from the eighth grade and continues to read a book or more a week. She credits twenty years of grantwriting, voracious reading and her mother, an English teacher in later life, for her writing ability. The mother of five grown children, grandmother of thirteen and great-grandmother of two, she lives in White Sulphur Springs, Montana and Sequim, Washington, with her husband Jim.