Items related to The Nickel-Dime Book 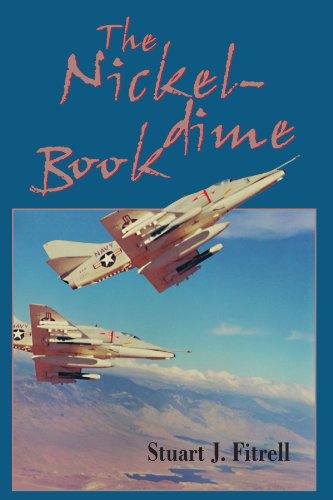 "Nickel-Dime Book" This work began in 1966 when I was a young Navy lieutenant fighter pilot in a squadron conducting combat operations from Yankee Station in the Tonkin Gulf during the Vietnam War. I made a conscious decision over Christmas of 1965 to make a detailed daily diary of everything that happened to me, the thoughts I had, and the experiences of others that I thought were interesting. That diary was derisively named by my roommate who objected to the lights being left on while I was carefully writing my entries as the "Damned Nickel-Dime Book", now shortened to simply the "Nickel-Dime Book." The book is not a factual account. I have tried to use the technique of telling a story with fictional characters that yields an understanding on the part of the reader of what it was like to be a fighter pilot at sea during that controversial part of our nation's history. The protagonist is Navy lieutenant Tom Farrell, call sign "Hawk". Although I was of the same rank, and experienced the same events, I describe the relationship between me and the Hawk as, simply, I was never as good as the Hawk, nor was I ever as bad. I suspect that there are those who would agree with the first assertion and strongly argue the second. He becomes obsessed with glory as measured by the receipt of medals for valor in combat. He achieves those measures of success, but the cost is a loss of friends and, nearly, a breakup of his marriage. He is not a particularly courageous pilot; that was never determined. Oh, he clearly sought the dangerous missions and attacked targets with unnecessarily risky tactics, but that does not indicate courage. Courage belongs to the warrior who is himself absolutely terrified but carries out the mission to the best of his ability. If he is not terrified, perhaps he is merely stupid, or, very much a believer in his invulnerability, a somewhat common characteristic of youth. His performance in combat comes to the attention of the squadron commanding officer and the air wing commander. They are impressed, and begin offering him more challenging mission assignments thus exacerbating Hawk's relationships with his squadron mates. The Prologue introduces the Hawk and his family as they learn, quite suddenly, of a change of orders from his East Coast based squadron to another squadron about to embark for combat operations in Vietnam. Hawk begins the gradual slide of his relationships at home with his enthusiasm and happiness for this chance to shine. Chapters one through five involve various missions each chapter describing the Hawk in his quest for glory at any cost. Chapters six and seven bring the squadron back to Naval Air Station Cubi Point in the Philippines for rest and recreation. This section focuses more on the rest of the squadron and a young woman, Terri Allen, herself the wife of another pilot from a sister ship who was recently shot down and is now listed as a Missing In Action aviator, is introduced to add complexity to the story and again indicate that Hawk is somewhat casual with the feelings of everyone but himself Subsequent chapters bring the squadron back to Yankee Station for its second line period and, at the conclusion of that period, Hawk manages to wrangle himself a short term assignment to the ground war in South Vietnam as an observer. These latter adventures on his part have now cut his friends in the squadron to a mere handful. By chapter 13 the squadron is conducting operations for its final line period. The Hawk has great moments but has finally accepted that something is wrong with the rest of the squadron. The executive officer of the squadron gives the Hawk some leadership lectures and the Hawk conceives of a plan to make a "comeback" by volunteering for some non-combat logistics flights from Yankee Station back to Cubi. It's fraudulent of course; he is really doing it to get some more time with the MIA's wife, Terri. At cruise end Hawk greets his wife wi

About the Author Stuart J. Fitrell is a Cleveland, Ohio, native who graduated from the United States Naval Academy with the class of 1962. He married his high school sweetheart and set off for Pensacola, Florida, to commence flight training. After receiving his wings, he deployed to the Mediterranean with an A-4 squadron embarked on the carrier Shangri-La. Upon return from the cruise, he received surprise orders to a squadron embarking for Vietnam operations. While in Vietnam, he maintained a detailed daily diary-the Nickel-Dime Book-for the year 1966 wherein he completed approximately 15 combat missions. He returned from the deployment and was ordered to test pilot school. He graduated, completed two years as an operational test pilot, and returned to Vietnam combat with an A-7 Corsair II squadron. Now retired from the Navy, he lives with his wife in St. Mary's County, Maryland.