Items related to The Empire Chronicles: Children of the Anunnaki

Barnette, Mark The Empire Chronicles: Children of the Anunnaki

The Empire Chronicles: Children of the Anunnaki 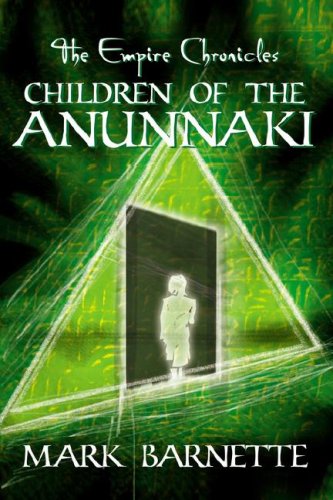 A car flies out of the night, taking aim at a stranger crossing a lonely street, empty except for a single witness: Dr. Dallas Roark. In an instant, car and stranger meet, and the impact sends a stunned Dallas tumbling down a path that would change his life forever. Before dying, the mortally wounded man gives his briefcase to Dallas, along with a single message: "find the Guardians." This final request sets in motion a series of events that challenge Dallas, a linguist and archaeologist, to re-examine everything he thought he knew. Looking inside the case, Dallas finds a triangular emerald tablet engraved with an indecipherable cuneiform script. Along with the tablet, Dallas finds clues that lead him to the Guardians, an ancient organization dedicated to the protection of the human race. When Dallas reveals to the Guardians that he possesses the tablet, they are forced to divulge to him both humanity's hidden history, and the consequences of this knowledge; a reality that they feel the human race is not yet ready to face. He immediately becomes a target for their adversaries - another secret society called the Order.Now there is no turning back; Dallas must join the Guardians in their quest for the treasures of the Anunnaki. With the help of Jorge, Miranda, Raj, and the rest of the team, Dallas pursues the mystery from the United States, across Africa, and into the Middle East in a race to discover the ultimate truth about the history and fate of mankind. Dallas must summon all his skill, knowledge, and intuition if he is to rescue humanity from a fate decreed over thirteen millennia ago. Can he decipher the mysterious emerald tablet, solve its ancient riddle, and save both the world and himself?

Mark Barnette brings to the epic of The Empire Chronicles a lifetime of travel, research and inquiry. As a journalist and international educator, he has spent years studying mankind's potential, as well as our ancient past, in order to bring you this glimpse of what might have been, and what might yet be. As a youth he wrote continuously, and dreamed of becoming an author; a desire he put on hold when he enlisted in the military. After serving in the US Air Force, he attended Kent State University, earning degrees in Journalism and Political Science. Upon graduation, Mr. Barnette joined the Atlanta Journal, but soon left the newspaper to begin his life's work as an educator. Over the next twenty years he worked in Atlanta, Los Angeles, and London, England as a faculty member, academic dean, and college president. In 1995, he left London, moving to the United Arab Emirates to co-found the American University in Dubai. After successfully opening the university, Mr. Barnette returned to the United States, settling with his family in South Florida. Now Mr. Barnette has returned to his creative roots; The Empire Chronicles is the result.

1. The Empire Chronicles: Children of the Anunnaki