Items related to The Auditor's Family 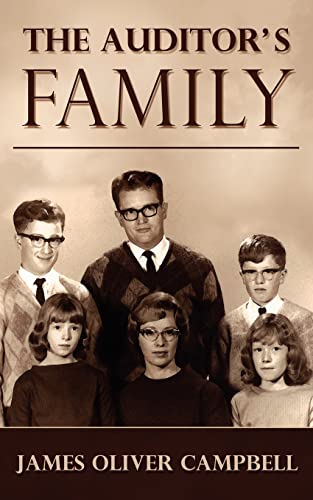 The mysterious Colon Campbell and his wife returned to Wisconsin to raise their family in a more settled environment, with secure employment and a stable lifestyle devoid of previous dangers. The secrecy practiced in this effort to be unidentified had powerful help, often with surprising results.Colon Campbell was employed by the State of Wisconsin. His natural tendencies to be aggressive, hard working, sincere, reliable and totally opposed to becoming institutionalized often marginalized his efforts to overcome educational limitations with flawless integrity.Colon Campbell's amazing success within the complexity of avoiding identification while maintaining the ultimate goal of stabilizing a family environment and secure financial stability is a worthwhile reading for anyone interested in the diversities of parenthood.

Famous author James Oliver Curwood died in 1927. James Oliver Campbell, born in 1927, was named after him.Nine years later, during the Great Depression the Campbell family moved to Wisconsin. The complicated and unstable lifestyle with alcohol abuse, poverty and divorce prevented a normal childhood including difficult, inflexible and time consuming farm labor between the ages of 11 and 13. The miserable routines of hard work before and after school was a constituent of survival that constantly stiffened James Oliver Campbell's already stubborn and independent nature to create his strong will to survive adversity.James Oliver Campbell developed a tendency to be a loner. He did not make friends easily. However, this complexity did not dissuade his natural and affable disposition.Although James Oliver Campbell's life took numerous paths of accountability, responsibility and serious adversity he was always positive, optimistic and very happy.The Author's Family is a fictional book of truth that could be considered to portray the author's true nature that includes his arcane and aggressive personality and character.