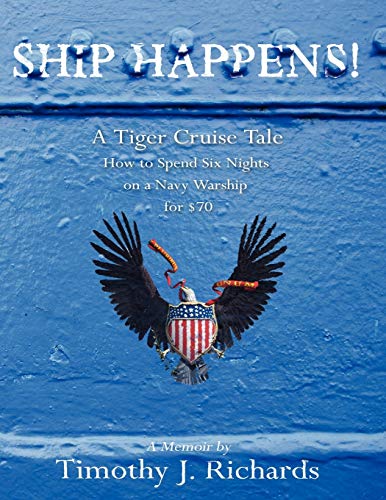 Ship Happens! is a journal-a personal blending of the youthful memories of my two children and a six-night adventure on a Tiger Cruise as a guest on a United States Navy warship, the USS Bridge. From my sailor son's initial invitation by e-mail from the Persian Gulf, culminating with the heart-warming reunion with his family on the Bremerton naval pier, this 22-photo documented book chronicles the nine-day event, from the initial problems associated with traveling to the well-planned military demonstrations that took place on a daily basis aboard ship. Following my son Tim's eight-month deployment to the Persian Gulf when the Iraqi War broke out in 2003, my daughter and I were invited on the Tiger Cruise, sailing from Pearl Harbor to Bremerton Naval Base, Washington. But the cruise was more than an adventure. It was to honor my son for enlisting in the Navy following the terrorist attack on 9/11 and to encourage my twenty-five year old daughter to take advantage of the opportunity to see what living was like on a military warship. I wanted her to join me as family ambassadors when the ship returned to homeport, and Tim greeted his wife who had delivered their first child while he was on duty in the Gulf. The book concludes with a heart-warming scene and photograph of Tim holding his newborn baby while his adoring wife and tearful sister look on.

A commercial photographer for nine years prior to becoming an insurance agent for the past thirty-four years, Tim Richards earned his Master of Financial Services degree in 2000 from the American College, Bryn Mawr, Pennsylvania. He served in the U.S. Army (1961-1964) during the Cold War as section chief, fire direction control, 35th Artillery Group, 37th Artillery, Dachau, Germany. Tim is currently the owner of an insurance agency in Westlake, Ohio, and is a part-time student of creative writing at Cleveland State University. His nonfiction prose and poetry have been published sixteen times in eleven issues (two cover issues) of the Vindicator, a multicultural magazine of Cleveland State University. He also took second place in the CSU Spring 2007 Creative Writing Contest. In 2002, he self-published a 505-page genealogical and personal history volume titled The Richards and Barry Families, Library of Congress #2001095928. Tim has two children and lives in Olmsted Twp., Ohio, with his wife, Betz, who is also an aspiring writer.