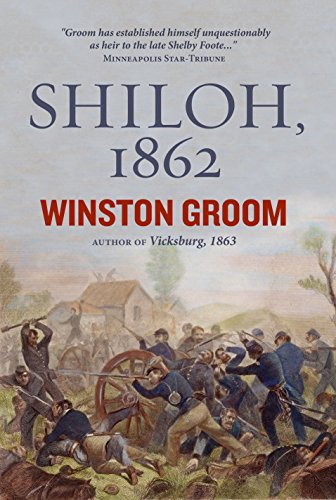 In the spring of 1862, many Americans still believed that the Civil War, "would be over by Christmas." The previous summer in Virginia, Bull Run, with nearly 5,000 casualties, had been shocking, but suddenly came word from a far away place in the wildernesses of Southwest Tennessee of an appalling battle costing 23,000 casualties, most of them during a single day. It was more than had resulted from the entire American Revolution. As author Winston Groom reveals in this dramatic, heart-rending account, the Battle of Shiloh would singlehandedly change the psyche of the military, politicians, and American people--North and South--about what they had unleashed by creating a Civil War.

In this gripping telling of the first "great and terrible" battle of the Civil War, Groom describes the dramatic events of April 6 and 7, 1862, when a bold surprise attack on Ulysses S. Grant's encamped troops and the bloody battle that ensued would alter the timbre of the war.

The Southerners struck at dawn on April 6th, and Groom vividly recounts the battle that raged for two days over the densely wooded and poorly mapped terrain. Driven back on the first day, Grant regrouped and mounted a fierce attack the second, and aided by the timely arrival of reinforcements managed to salvage an encouraging victory for the Federals.

Groom's deft prose reveals how the bitter fighting would test the mettle of the motley soldiers assembled on both sides, and offer a rehabilitation of sorts for Union General William Sherman, who would go on from the victory at Shiloh to become one of the great generals of the war. But perhaps the most alarming outcome, Groom poignantly reveals, was the realization that for all its horror, the Battle of Shiloh had solved nothing, gained nothing, proved nothing, and the thousands of maimed and slain were merely wretched symbols of things to come.

With a novelist's eye for telling and a historian's passion for detail, context, and meaning, Groom brings the key characters and moments of battle to life. Shiloh is an epic tale, deftly told by a masterful storyteller.

WINSTON GROOM is the author of fourteen previous books, including Patriotic Fire, Shrouds of Glory, Forrest Gump, and Conversations with the Enemy (with Duncan Spencer), which was a Pulitzer Prize finalist. He lives with his wife and daughter in Point Clear, Alabama.

By early April 1862 the spring storm season had already begun in Tennessee. The thunderheads made up on the southern plains, then tore across the South with lightning and killer tornadoes. Terrifying as this was, it paled before the violent thing now gathering along the Mississippi River Valley.

From Illinois, Ohio, and Iowa, Indiana, Michigan, Wisconsin, and Minnesota, Northern men had begun to converge. They marched in turn by squads, platoons, companies, regiments, brigades, and finally whole infantry divisions. As the cold Dixie weather receded and they tramped farther south, before them loomed a great battle they were told would bring an end to the war.

Up from the South likewise they came, from Alabama, Mississippi, Louisiana, Texas, Georgia, Florida, and Arkansas; Tennessee, of course, was represented in full. And from the border states Kentucky and Missouri came men of both sides who fought as friend against friend, sometimes brother against brother. There were more than a hundred thousand in all—whose average age was not yet 20.

Down in the far southwestern corner of the state the winding Tennessee River straightens out for twenty or so miles after changing its course northward toward the wide Ohio. Halfway along that stretch is a bight on the western bank, occupied long ago by a tribe of mound builders, now called Pittsburg Landing, a nondescript hog-and-cotton loading station perched before tall oak-strewn bluffs where steamboats put in from time to time. There they took on cargo and traded with the residents, who were fairly low on the scale of Southern sophistication in the era of King Cotton and the fanciful aura of moonlight and magnolias. These Pittsburg Landing people might have had plenty of the latter, but it was about all they had. The curse of slavery was barely a whisper in the scratched-out fields among the shocking thickets where they eked a living and went to Sunday meetings at an ax-hewn chink-and-mortar Meth- odist church named Shiloh chapel. The church itself was hardly better than a respectable Missouri corncrib in its design and archi- tectural aspect, but it was a house of God and gave its name to one of the bloodiest battles of the Civil War.

On Sunday morning, April 6, the fateful day, Elsie Duncan, then age nine, told of being in the garden of her family’s home about a mile west of Pittsburg Landing. The place was peaceful “as paradise” itself, she remembered, surrounded as it was “by a beauti- ful forest with every kind of oak, maple and birch,” plus “fruit trees and berry bushes and a spring-fed pond with water lilies blooming white.” Her father, Joseph, was one of the few substantial citizens of the area, owning a farm of 200 acres called Pleasant Land as well as being a circuit-riding preacher of the Gospel. Everybody had been on edge for several weeks, ever since the Duncans’ black nurse Margie had come back from a visit to the landing to report that there were “strange steamboats on the river, and Yankees camped in the hills.”

Hardin County, where Pittsburg Landing was located, was fairly typical of rural Tennessee outside the state’s main cotton belt. In the 1861 referendum on secession, the residents voted to stay with the Union, and there was still strong Union sentiment on the east side of the river. But on the west side, where Elsie Duncan lived, the young men had been formed to fight for the Confederacy, and had been drilling regularly, led by her own father, whom she described as a “drill master” in addition to his duties as a Rebel chaplain. It was at one of these drill sessions, or parades, that she spent her final time in “that dear old Shiloh church.” It had been appropriated for a Rebel celebration, she recalled, complete with Confederate flags and a chorus of little girls “dressed in red, white, and blue, and singing ‘Dixie.’ ”

The suddenness with which war had come to Hardin County alarmed everyone. Citizens began to plan for some sort of cataclysm as the blue-clad Federals arrived by the hundreds, and then the thousands, at Pittsburg and other landings along the river. Reverend Duncan had a cave on his property, “at the edge of the woods, just above the spring which was under a bluff just back of the orchard.” It was “about the size of a large room,” she said, and her father rein- forced the roof with heavy planks and laid a floor, then “sealed the entrance off with brush and made a trap door with a ladder to go down.” It would prove to be a safe harbor when fighting broke out.

The people in that part of the country, she said, “did not know how long the war was going to last,” and so in a small cabin far back in the woods her father also hid “eight barrels of home-raised flour upstairs, buried a large box of home-raised hams in the garden and put a sweet potato bed on top of them.” The men, she recalled, “left everything as secure and safe as they could to protect their homes and families, and then left them in the care of the Lord” to join the Confederate army.

Thus, Elsie, her mother, Harriet, and her five children ranging in age from 7to 15, as well as their nurse Margie, were home alone on Sunday morning, April 6, 1862, when from somewhere beyond the deep woods came the rough, guttural muttering of artillery like distant thunder. Elsie had not had breakfast and was out in the garden playing.

“It was a beautiful Sunday morning. The sun was shining, birds were singing, and the air was soft and sweet,” she said. “I sat down under a holly-hock bush which was full of pink blossoms and watched the bees gathering honey.”

Elsie Duncan hadn’t the faintest idea at that point—nor had many of the 40,000-strong Yankee host nearby—that something dreadful was brewing in the tangled forests to the south and descending upon them as swift and merciless as a cyclone from the southern plains.

3. Shiloh, 1862: The First Great and Terrible Battle of the Civil War (Hardback)

Book Description National Geographic Society, United States, 2012. Hardback. Condition: New. New. Language: English. Brand new Book. In this gripping telling of the first "great and terrible" battle of the Civil War, Groom describes the dramatic events of April 6 and 7, 1862, when a bold surprise attack on Ulysses S. Grant's encamped troops and the bloody battle that ensued would alter the timbre of the war. Seller Inventory # FLT9781426208744

6. Shiloh, 1862: The First Great and Terrible Battle of the Civil War (Hardback)

Book Description National Geographic Society, United States, 2012. Hardback. Condition: New. New. Language: English. Brand new Book. In this gripping telling of the first "great and terrible" battle of the Civil War, Groom describes the dramatic events of April 6 and 7, 1862, when a bold surprise attack on Ulysses S. Grant's encamped troops and the bloody battle that ensued would alter the timbre of the war. Seller Inventory # FLT9781426208744

8. Shiloh, 1862: The First Great and Terrible Battle of the Civil War (Hardback)

Book Description National Geographic Society, United States, 2012. Hardback. Condition: New. New. Language: English. Brand new Book. In this gripping telling of the first "great and terrible" battle of the Civil War, Groom describes the dramatic events of April 6 and 7, 1862, when a bold surprise attack on Ulysses S. Grant's encamped troops and the bloody battle that ensued would alter the timbre of the war. Seller Inventory # BTE9781426208744