Items related to The Humour of Homer and Other Essays

Samuel Butler The Humour of Homer and Other Essays

The Humour of Homer and Other Essays 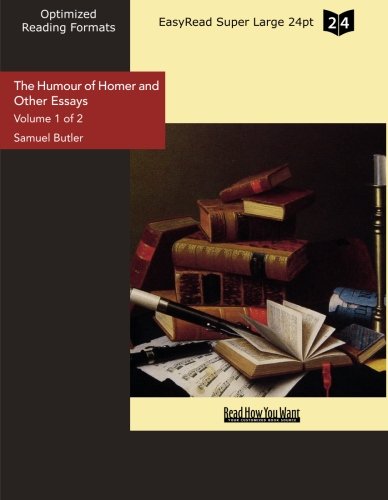 Samuel Butler's The Humour of Homer and Other Essays (1904) is a biographical sketch that provides an insight into his study of Odyssey and Iliad and his attitude towards the Homeric poems. The other essays throw light on a variety of topics, ranging from his theories on biological evolution to topics as how to live a good life, with essays like, The Deadlock in Darwinism and Quis Desiderio.

Samuel Butler (1835-1902) is best known for his utopian satire "Erewhon", his posthumous novel "The Way of All Flesh", and his translations of Homer. His family background made a career in the Church inevitable, but, while serving a low-income parish in London, he began to question his faith. He lived in New Zealand for five years, and later in life spent time in Italy.