Items related to Seasons of Light, Impressions of Steamboat Springs...

Seasons of Light, Impressions of Steamboat Springs and the Yampa Valley 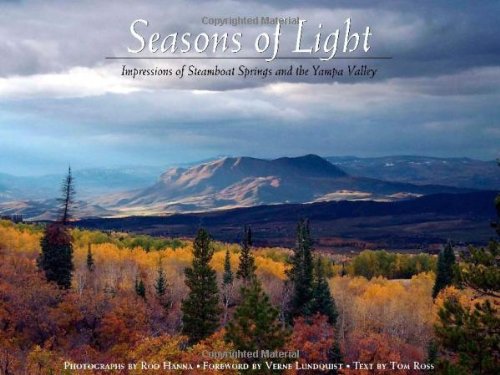 A 192-page hard cover coffee-table book of photographs by Rod Hanna, portraying the beauty of the Yampa Valley---with a foreword by CBS broadcaster Verne Lundquist and text by long-time Steamboat Pilot and Today writer and editor Tom Ross. Fine art painters and photographers have understood for decades that there are certain locations in the great American West where landforms are painted with exceptional light light that elevates their work and allows them to elicit an emotional response in people who view the imagery. As the seasons turn within the giant wheel of the heavens, patient observers can plot the subtle changes in the quality of light on a calendar. Steamboat Springs and the Yampa Valley, on the Western edge of the Rocky Mountains, in Northwest Colorado, is one of those special places where one can follow the Seasons of Light. This book is for those who sense a connection to the land and revel in its sometimes dramatic, sometimes subtle beauty. Fine art photographer Rod Hanna has roamed this land for more than 30 years, training his expert eye from the headwaters of the Yampa River in the Flat Tops Wilderness Area to its confluence with the Green River in Dinosaur National Monument. But it is the lush valley, abundant waterways, and massive snow-capped mountains in between that have inspired him to chase the light and capture this beauty over the years which he now shares with us. The incredible light becomes the subject, and the landscape---flowers, trees, grasses, rivers and streams, rock formations, and the color of the seasons provides the ultimate setting.

ROD HANNA Rod Hanna has been a professional photographer for over 40 years. Hanna moved to Steamboat Springs from Kansas City in 1975 after 12 years as a photojournalist and sports photography specialist. He then began a 25-year career as a marketing executive for the Steamboat Ski Resort---announcing his retirement in 2000. Continuing to be active as a photographer over the years---including 12 years as official photographer for the Denver Broncos, his interest turned to travel and fine art photography. During this time, he began to show his work in art galleries as time allowed from his business career. In November 2007 he published his first book of his photographs, Seasons of Light. TOM ROSS Tom Ross is a longtime writer and photographer for the Steamboat Pilot and Today newspapers in Steamboat Springs. A native of Wisconsin, he got his start in the business in 1977, visiting a different dairy farm each week and writing the Farm Review for the Chilton Times-Journal. In 2006, Ross was a member of a team of journalists that produced a six-part series on the future of the Yampa River. It won a national award for explanatory reporting from the Inland Press Association. The Associated Press recognized Ross in 2007 with awards for environmental and business writing. Ross own photographs have been licensed for commercial uses in more than 20 countries. He frequently packs his notebook and camera on fly-fishing and Nordic skiing outings in the Yampa Valley. VERNE LUNDQUIST Steamboat Springs resident Verne Lundquist is the lead play-by-play announcer for the CBS s coverage of college football after having previously worked for CBS from 1982-1995. He spent eight years at ABC Sports and three years as an announcer for TNT's sports coverage and was lead play-by-play announcer for CBS's coverage of figure skating during the 1992, 1994 and 1998 Olympic Winter Games. Lundquist provides commentary for the Masters®, the PGA Championship, among other PGA TOUR events and marked his 20th year covering the Masters® in 2004. Over the years, Lundquist has broadcast 20 different sports for CBS. Lundquist was inducted into the Texas Sports Hall of Fame and in April 2007 was inducted into the National Sportscasters and Sportswriters Hall of Fame

The Yampa Valley is that pristine swath of land as you descend the west side of Rabbit Ears Pass. The valley of the Yampa River, however, is much more than the emerald fields with the indigo mountains behind them. Hanna, a one-time Broncos photographer and a former marketing executive with Steamboat Ski Resort, spent years capturing the area's unique beauty. Many of his shots are panaoramas, which explains the horizontial format of this book. There are swaths of yellow aspen trees, afternoon clouds over a red barn, ice-covered bushes in a snowfield lit by a pink dawn, a boulder field near Mica Lake covered wit arnica and daises. While most of the photographs show broad sweeps of landscapes, "Seasons of Light" includes close-ups. There's the de rigueur shot of a purple colombine, there's one set among ferns, and another of a wild rose. Perhaps the most beautiful is of a bed of blue and white lupine and red Indian paintbrush, A Fourth of July flower spectacular, shaded by a grove of aspen. Dozens of photo books of Colorado scenery have been published over the years, so you get a bit jaded looking at pictures of autumn aspen and summertime meadows. "Seasons of Light" will take your breath away. --Sandra Dallas, The Denver Post

1. Seasons of Light, Impressions of Steamboat Springs and the Yampa Valley

2. Seasons of Light, Impressions of Steamboat Springs and the Yampa Valley