Items related to We Shadows Volume 1 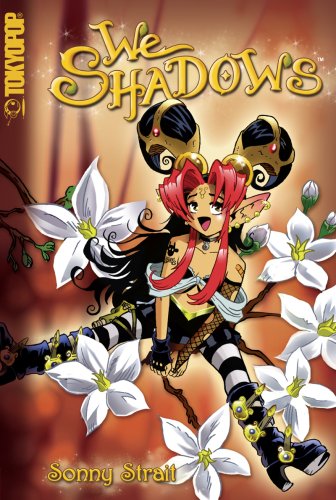 Follows the adventures of Goat as she unlocks the secret of her origins and her untapped power in the world of Shadows, a magical place where faeries, ogres, and hobgoblins co-exist.

After a long stint assisting Wendy Pini on fan-favorite Elfquest, Strait strikes out on his own with a manga-style tale of intrigue in the world of faerie. Cosmo and Vogue are modern faeries, obsessed with glamour and looking to take over from their stodgy predecessors. They've talked Oberon out of his crown, put Titania to sleep and are about to retire Puck. Meanwhile, the unfortunately named Goat trains to be a faerie princess with the help of her friend Mushroom—an actual magic mushroom. Like most volume ones, this is pure setup, but there's no padding. By the end of the volume, the status quo has been shaken harder than a melontini. Strait's art is eye-catching: more anarchic than pure manga; it's influenced as much by Tex Avery as by CLAMP. Strait has good comic timing, a breezy sense of storytelling and a sly sense of humor. He sends up manga conventions, without in-jokes getting in the way of the story. The subject matter and approach will immediately appeal to old-school fantasy fans of the kind who appreciated Robert Asprin and Phil Foglio's Myth Adventures series. (Aug.)
Copyright © Reed Business Information, a division of Reed Elsevier Inc. All rights reserved.