Items related to Readings for Writers 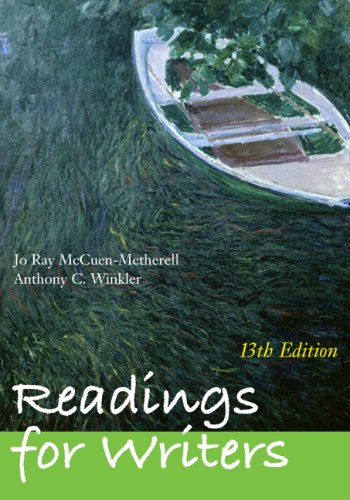 For freshman composition courses in both two- and four- year schools.

Born in Belgium, the daughter of an American minister, Jo Ray McCuen-Metherell had moved from Brussels to Paris to Bern, Switzerland, by the time she was seven years old. In Bern, she attended the Freies Gymnasium and spoke not only fluent French and German but also English, which was the language spoken to her by her American parents. After enduring World War II, Jo Ray's parents sent her and her brother to Pacific Union College (in the Napa Valley), where Jo Ray received a B. A. in English. After teaching English and French in high school for several years, Jo Ray started to take night classes at the University of Southern California in order to earn an M.A. and Ph.D., which would allow her to teach in college. While working on her doctorate, she was first hired to teach English at Glendale Community College and later to serve as Dean of the Evening College. A chance meeting in 1973 with Anthony C. Winkler, a successful novelist, led to a literary partnership that has produced 15 coauthored textbooks used at colleges and universities across the United States.

Born in Kingston, Jamaica West Indies, Anthony C. Winkler was educated in Jamaica at Excelsior College, Mount Alvernia Academy, and Cornwall College, the last two being in Montego Bay. He was also educated at Citrus Community College, Glendora, California. Winkler taught briefly at Pasadena City College and for a year at Moneague Teachers College in Saint Anne, Jamaica, an experience chronicled in GOING HOME TO TEACH (1995). From 1968 to 1975 Winkler had sales territories as a bookman for Appleton Century Crofts textbook publishers, and later for Scott, Foresman. In 1969 he decided he could write textbooks as well as anyone and through a chance meeting with the sales representative of another company, he submitted the manuscript POETRY AS SYSTEM and was offered a contract for its publication. Eventually, he met Jo Ray McCuen-Metherell and the two became textbook writers and collaborators. Over the years they have produced more than a dozen textbooks, most on rhetoric and writing. In addition to Winkler's textbooks, his body of work includes, among other books: THE PAINTED CANOE (novel, 1983); THE LUNATIC (novel, 1987); THE GREAT YACHT RACE (novel, 1992); DOG WAR (novel, 2006); TRUST THE DARKNESS: MY LIFE AS A WRITER (autobiography, 2008); THE BURGLARY (play, premiered in Toronto in 2005); THE LUNATIC (movie, filmed in 1991); THE ANNIHILATION OF FISH (movie, 1999); and BOB MARLEY, AN INTIMATE PORTRAIT BY HIS MOTHER (biography, 1996, with Cedella Booker).