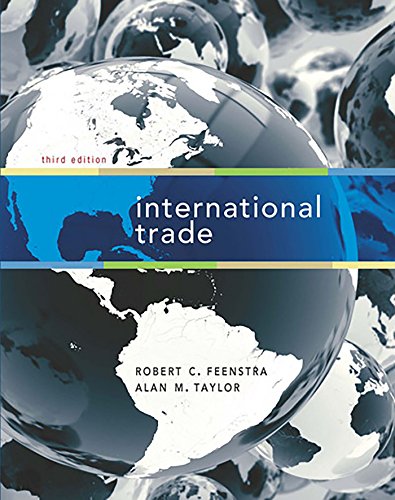 The new edition has been thoroughly updated throughout.  In addition, it will be available in its own dedicated version of LaunchPad, Worth Publishers’ breakthrough new online course space.

See what's in the LaunchPad

Robert C. Feenstra is Professor of Economics at the University of California, Davis. He received his B.A. in 1977 from the University of British Columbia, Canada, and his Ph.D. in economics from MIT in 1981. Feenstra has been teaching international trade at the undergraduate and graduate levels at UC Davis since 1986, where he holds the C. Bryan Cameron Distinguished Chair in International Economics. Feenstra is a research associate of the National Bureau of Economic Research, where he directs the International Trade and Investment research program. He is the author of Offshoring in the Global Economy and Product Variety and the Gains from Trade (MIT Press, 2010). Feenstra received the Bernhard Harms Prize from the Institute for World Economics, Kiel, Germany, in 2006, and delivered the Ohlin Lectures at the Stockholm School of Economics in 2008. He lives in Davis, California, with his wife Gail, and has two grown children: Heather, who is a genetic counselor; and Evan, who recently graduated from Pitzer College.