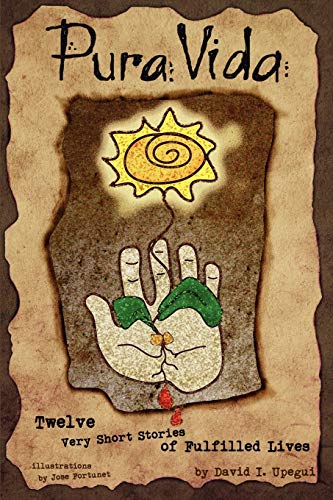 Pura Vida The words are: pure and life. In context it means, "nothing but life," or "a whole lot of life," or "all life." Pura Vida is the collection of people and stories that transcend the paper and rise from the page with color, form and life. Miraculous, tragic, humorous and wondrous, these stories are about the essential aspects of the human experience. Unpolluted emotions and passion combine to form these very short accounts of fulfilled lives - pura vida!

David I. Upegui was born in Colombia in 1976. He migrated to the United States at the age of eleven. He is a graduate of Central Falls High School and Rhode Island College, where he completed his Master's degree in Psycho-biology. For the last 5 years he has served as the data manager for ICHP at Brown University. Although a scientist by training, music and art are integral to his life. His experiences and imagination are vividly expressed in his writing.

Jose Fortunet was born in Mayaguez, Puerto Rico in 1970. He moved to Rhode Island in 1984 and currently resides in Warren, Rhode Island. His artwork is a study of lines, where contrast of black and white creates visions of reality. At one point, Jose and David both played in the music band infusion.

Agnieszka Barnes was born in Odporyszów, Poland in 1977 and is also a graduate of Central Falls High School. Although right-handed, and presumably left-brained, both hemispheres of gray matter are best friends. They occasionally have wine with the right ventricle of her heart, where her art and design are born. She is (quite deceptively) a romantic and (quite obviously) a lover of aesthetics.