Items related to Mother Teresa Is Not In Heaven And Hitler Is Not In... 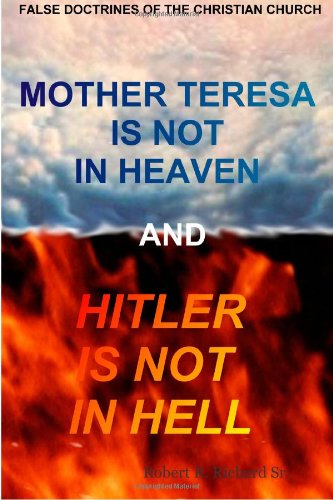 This book is written about the many different false doctrines in contemporary Christianity. Contemporary Christianity refers to those who believe that Jesus lived in the beginning of the first century, had an earthly ministry which lasted three and a half years, was crucified by the Romans at the request of His own people; the Hebrews. He died and was buried and three nights and three days later He was raised from the dead just like He said He would be. Many of the contemporary Christian beliefs and practices have their origins in ancient and mid-evil pagan religious practices. Two of the major Christian holidays, Christmas and Easter, originate from there. This book looks at beliefs on the soul, the spirit, heaven and hell, the Devil, and life after death. It compares contemporary Christian belief with what is actually written in the Bible. You will be surprised what Christians say is true and what the Bible actually says!