Items related to The Price of Free Will: The Singularity Cometh

Dorda, Christopher The Price of Free Will: The Singularity Cometh

The Price of Free Will: The Singularity Cometh 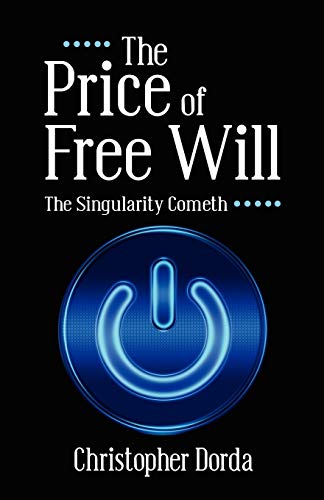 The Price Of Free Will, by Christopher Dorda

If you had the capacity to change the world for what you thought was "the better", would you? Even if it redefines what it means to be human? What if you knew it would kill you? Alistair Maxwell, genius, hacker, some might even call him a precognitive sociopath, is thrust into this very dilemma by an assassination attempt on his life.

Through hard work and study, Alistair Maxwell gains access to every bit of information available on the planet and starts making connections. What he discovers sends him into a schizophrenic paranoid depression. Corruption, war, ignorance, starvation, poverty, exploitation, genocide... A single ever-repetitive thought permeates his existence: "Someone has to do something about this!"

In 2005, in a quantum reality very close to our own, Alistair Maxwell is about to exercise his free will. Employing his unique precognitive abilities, knowing that his own death is assured whether he fails or succeeds, he attempts to end the suffering of the world because he believes that he can, and because he believes it's the right thing to do.

This is the story of an event that hasn't occurred in our reality, but deep down inside, we all know, it's only a matter of time before it does.

"Technological Singularity refers to the hypothesis that technological progress will become extremely fast, and so make the future unpredictable.

"Although technological progress has been accelerating, it has been limited by the basic intelligence of the human brain, which has not changed significantly for millennia.

"However with the increasing power of computers and other technologies, it might soon be possible to build a machine that is fundamentally more intelligent than man.

In other words, here comes Maxwell's AI, and Humanity will never be the same.

"I. J. Good described this as an "intelligence explosion". It is quite different from normal technological progress because the underlying intelligence is being increased. The term Technological Singularity reflects the idea that the change may happen suddenly, and that it is very difficult to predict how such a new world would operate. It is also unclear whether there would be any place for man in a world containing very intelligent machines." -Wiki

Christopher Dorda was born in Montreal, Quebec, in 1973. The first decade of his life took him and his family across the globe, from Tunisia to Switzerland. The second decade of is life was spent in Canada where he went to school and excelled at two things: science and being sent to the principal's office. The third decade of his life was spent immersed in theoretical physics while enthusiastically exploring the concept of "living life as art".

Now at 37, somewhat older, hopefully wiser, and definitely humbler, he lives in the Montreal borough of St-Henri with the love of his life.

A Note From The Author

You never forget your first love. Similarly, every novelist I ever met told me that if I survived the life thrashing associated with this career choice, I'd never forget my first novel either. It's hard letting go, but the future awaits! Alons-y!

Enjoy the delinquency. Find me. Write me.

1. The Price of Free Will: The Singularity Cometh (Paperback or Softback)

2. The Price of Free Will: The Singularity Cometh

3. The Price of Free Will: The Singularity Cometh

4. The Price of Free Will: The Singularity Cometh