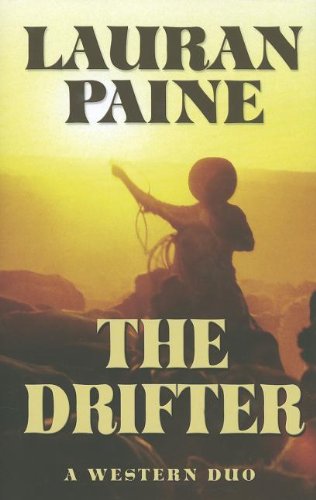 Two action-packed stories of the American West available for the first time in hardcover book format. George Alden Morgan in Gunnison Butte never knew his father and is abandoned at fourteen by his mother who runs off one morning before George is awake, leaving him eleven silver dollars. On his own, George steals a fine horse and a gun and leaves town. He eventually partners up with Boone Helm, a man who knows how to survive in the wilderness. What happens to George is something he could never have imagined. Jared Carson in The Drifter is a man always on the move, taking only seasonal work as a cowhand when need arises. He finds a wrangling job on the Five Pointed Star, a small ranch owned by Clem Forsythe. The two get along from the beginning, although from the first Jared realizes that Forsythe has a powerful enemy in Harry Brogan, a well-to-do businessman in the nearby town of Cinnebar.

The endlessly prolific Paine, who died in 2004, is here represented by two novellas, the title story and “Gunnison Butte.” “The Drifter” is about Jared Carson, who inherits a fine ranch when the man he’s just gone to work for, Clem Forsythe, is killed. The mystery of why Clem died seems to have much to do with a local wheeler-dealer named Harry Brogan, and there’s some rustling going on, too, but the story never overcomes its implausible premise, and the inevitable showdown seems underdeveloped and forced. “Gunnison Butte” is about two more drifters: a teenage orphan named George Alden Morgan, who steals a horse and flees to the New Mexico backcountry, and a sometime bandit, Boone Helm, who recalls in the boy his own hard past and guides him to a once-prosperous ranch that’s about to be gobbled up by a range hog. Boone walks the straight and narrow long enough to save the ranch and set young Morgan on a safe course in this solid, moving tale of friendship and frontier honor. --John Mort

Book Description Five Star. Hardcover. Condition: GOOD. Spine creases, wear to binding and pages from reading. May contain limited notes, underlining or highlighting that does affect the text. Possible ex library copy, will have the markings and stickers associated from the library. Accessories such as CD, codes, toys, may not be included. Seller Inventory # 3179518884

Book Description Five Star, 2012. Condition: Good. A+ Customer service! Satisfaction Guaranteed! Book is in Used-Good condition. Pages and cover are clean and intact. Used items may not include supplementary materials such as CDs or access codes. May show signs of minor shelf wear and contain limited notes and highlighting. Seller Inventory # 1432826069-2-4