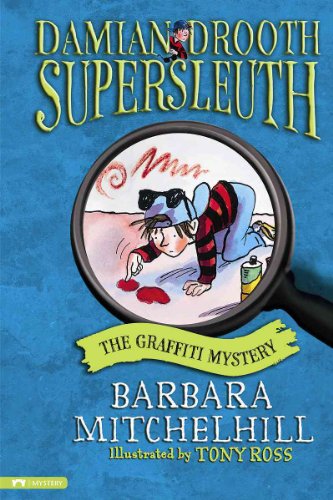 “I get really mad when people treat me like a kid,” says the titular protagonist of the Damian Drooth Supersleuth series, and it’s no wonder—he’s got the private-eye skills of someone several feet taller. This straightforward chapter book begins with Principal Spratt busting into the classroom and demanding answers regarding “Get Lost Sprat” graffiti in the bathroom. It’s the misspelling—the missing “t” in “Spratt”—that inspires Damian’s brainstorm of holding a fake contest where everyone in school is tricked into writing Spratt’s name, thereby allowing him to compare spelling and handwriting. A few more brainstorms are necessary before Damian solves the mystery, and Mitchelhill’s plot includes a subtle undernote about the dangers of jumping to conclusions too quickly. The identity of the perpetrator is disappointing—it’s a random person rather than an actual character—but there are plenty of amusing details along the way (like Damian’s pitiful cardboard badge) and some expressively scribbly artwork from Ross. Back matter includes a glossary, discussion questions, and writing prompts. Grades 2-4. --Daniel Kraus