Items related to Dinosaurs in Space 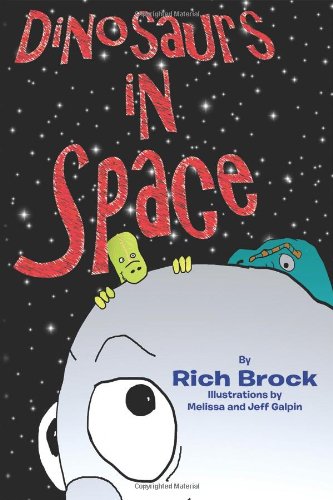 Who doesn't love dinosaurs? Who wouldn t love to frolic or roam the land with them, in all their expansive, majestic bodies and cuddly personalities? Certainly not a boy named Travis, who is so taken with the exciting creatures that one night, he dreams the dream of his young life and finds himself flying on the back of Taren, a pteradon who entices him to fly away with her to join the company of dinosaurs and give him the pulsating experience of a lifetime.

With Taren, Travis gallops into space, goes 'round the galaxy with other dinosaurs, including his favorite, the tyrannosaurus, and even plays star baseball with them. Travis has never had it so good, even having a close encounter with the rings of Saturn.

Dinosaurs in Space by Rich Brock lets us peek into one of the deepest fantasies a child could have in his mind when it comes to these enthralling creatures.

With a degree in History from Whitworth College, Spokane, Washington, Rich Brock works in broadcasting as a radio programming assistant. A native of California, he has spent the last twenty-seven years living in the Grass Valley area. Rich is married to Amy, and likes writing, reading, hiking and following Major League baseball and hockey.