Items related to Extra Innings: A Novel Based on the Life of Jack "Lucky&...

Mark Drattel Extra Innings: A Novel Based on the Life of Jack "Lucky" Lohrke

Extra Innings: A Novel Based on the Life of Jack "Lucky" Lohrke 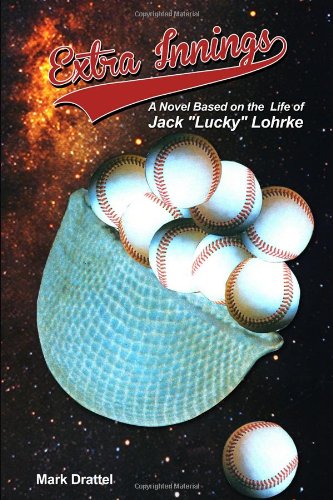 Jack "Lucky" Lohrke was born on Monday, February 25, 1924, in Los Angeles, California. A .242 hitter with 22 career homeruns over 7 big leagues seasons (1947-53) for the New York Giants and Philadelphia Phillies, primarily as a third basemen, Lohrke was better known for the tragic circumstances that lead to his nickname.

Lohrke fought at Normandy and in the Battle of the Bulge. He emerged unscathed, but four times a soldier next to him was killed. When he shipped home in 1945, after three years of service in the U.S. Army, he was bumped from a transport flight out of New Jersey at the last minute; the plane crashed, killing everyone aboard. The next year, after he resumed his baseball career, Lohrke was traveling with the Class B Spokane Indians on a bus trip across Washington State. During a stop for food, he found out he had been promoted to Triple A San Diego, so he took his gear and hitchhiked to Spokane, where he found out the Indians bus had crashed down a ravine, killing nine of his former teammates, including his player/manager Mel Cole. The six survivors were badly injured.

He was called "Lucky" from that point on.

Lohrke reached the major leagues the following year, making his debut on April 18, 1947.

Lohrke died, age 84, at a hospital in San Jose, California, in 2009, two days after suffering a stroke.

Mark Drattel grew up in Cedarhurst, L.I., N.Y., and was educated at S.U.N.Y Buffalo and Rutgers, New Brunswick, N.J. For 27 years he taught high school English in Red Bank, N.J. and Mamaroneck, N.Y. He currently resides in Ossining, N.Y., with his wife Erica, a pediatric nurse. Extra Innings is his first novel.

1. Extra Innings: A Novel Based on the Life of Jack "Lucky" Lohrke

Book Description Dorrance Publishing Co 2012-05-07, 2012. Paperback. Condition: Good. Item is in good condition. Some moderate creases and wear. This item may not come with CDs or additional parts including access codes for textbooks. Might be an ex-library copy and contain writing/highlighting. Seller Inventory # DS-1434931293-3

2. Extra Innings: A Novel Based on the Life of Jack "Lucky" Lohrke