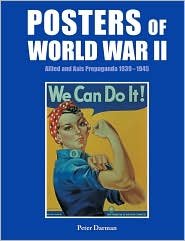 Synopsis During World War II posters were the most widely used propaganda tools of all the combatant nations. During the war posters were literally everywhere, imparting immediate and forceful messages. Posters were used in a variety of ways: as an appeal to patriotism in aid of recruitment, as warnings to upkeep national security against spies and saboteurs, and general pleas to aid the war effort, either by working in factories or buying war bonds. They highlighted enemy atrocities, reminded the people of the nation's allies, and gave dire warnings of the consequences of defeat and enemy occupation. As such posters were responsible for arousing a wide range of sentiments: hatred, paranoia, pride, and nationalism. Posters of World War II is a study of the war poster as a propaganda phenomenon between 1939 and 1945. It considers that they were often excellent and beautiful pieces of artwork as much as they were tools for imparting information. Never before has such a comprehensive collection of World War II posters and authoritative text been combined. Posters of World War II contains 200 posters, which accompanies by detailed captions. The text details the facts about the poster, where possible profiling the artist, explains the significance of its message, and considers its impact in the context of the war. Thus there are posters by such famous artists as Cyril Kenneth Bird, better known as Fougasse, Abram Games, and the Nazi propagandist Hans Schweitzer, who operated under the name Mjölnir.

Book Description Metro Books. Hardcover. Condition: Fair. A readable copy. All pages are intact, and the cover is intact. Pages can include considerable notes-in pen or highlighter-but the notes cannot obscure the text. The dust jacket is missing. At ThriftBooks, our motto is: Read More, Spend Less. Seller Inventory # G1435104382I5N01

Book Description Metro Books. Condition: Good. All orders guaranteed and ship within 24 hours. Before placing your order for please contact us for confirmation on the book's binding. Check out our other listings to add to your order for discounted shipping. Seller Inventory # BOS-N-12d-00409

Book Description Metro Books, 2008. Condition: Good. First Edition. Shows some signs of wear, and may have some markings on the inside. Seller Inventory # GRP71382267