Items related to Tarzan of the Apes The First Three Novels, Barnes and... 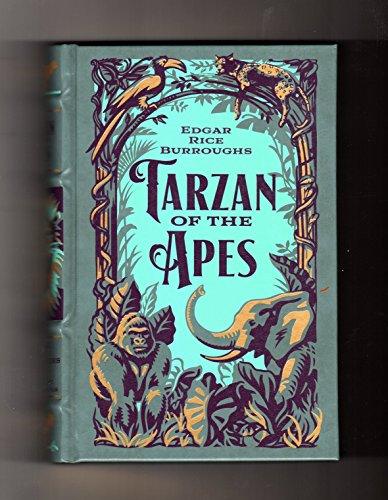 In this epic series, a British royal couple's son is orphaned on the coast of Africa, where he is raised by the great apes of the jungle. Able to walk between two worlds, he becomes not just Lord Greystoke but Tarzan of the Apes. In this beautiful hardcover edition, you will find the first three thrilling installments in Edgar Rice Burroughs' landmark adventure. Tarzan of the Apes: A mutiny on board their ship leaves Lord and Lady Greystoke stranded on a desolate African beach with their newborn son. Soon after, the aristocratic couple perishes, leaving the boy an orphan--until the she-ape Kala rescues the infant, names him "Tarzan" ("white skin"), and raises him as one of her own. As he grows, Tarzan schools himself in the ways of both man and beast and rises to become king of the jungle. But when he falls in love with Jane Porter, a beautiful American explorer, he is forced to choose between the two very different worlds. The Return of Tarzan: The adventure continues across two continents as Tarzan travels back to England, where he becomes embroiled in royal intrigue and espionage. Later, returning to his African jungle home, he is proclaimed leader of the Waziri tribe--and told about a fabulous lost city full of treasure ruled by a beautiful priestess. The priestess falls in love with Tarzan, but he cares only for his fiancée, the American beauty Jane Porter--and when she's kidnapped by a dangerous tribe of apelike men, Tarzan must use all his powers as king of the jungle to rescue her. Beasts of Tarzan: In this third thrilling installment in Edgar Rice Burroughs's perennially popular series, Tarzan is exiled on a wild island filled with dangers. There, he must enlist the help of a noble panther and a tribe of apes in order to return to the mainland and rescue his wife and infant son from the clutches of his nemesis, the villainous Nikolas Rokoff.