Items related to Oh My Goddess! 5 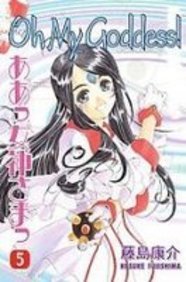 Skuld, who loves to overengineer, has trouble understanding the simple appeal of a bicycle--until Sentaro, a boy in town, teaches her how to ride one. But Skuld is new to understanding love as well...Meanwhile, the girl on campus who can never get enough love (and worship), Sayoko Mishima, is willing to sell her soul to help demonness Mara defeat Belldandy...and turn Nekomi Tech into a literal castle where Queen Sayoko reigns supreme!

Born in Chiba, Japan, he first came to public attention as an editor of Puff magazine, his first job after completing high school. Fujishima originally intended to be a draftsman, but took the editorial role after failing to get a drafting apprenticeship. He later became assistant to manga artist Tatsuya Egawa in the production of the Making Be Free! manga, and in 1986 began his first original manga series You're Under Arrest. His second manga series Oh My Goddess!, also translated as Ah! My Goddess, is extremely popular and has made Fujishima a household name in Japan. In addition, he is also well known as the character designer for several games in the Tales RPG video game series and Sakura Wars.

He is known for his love of automobiles and motorcycles, and several of his series and their characters reflect this, such as in éX-Driver and Oh My Goddess!. The author lives in Tokyo, Japan.