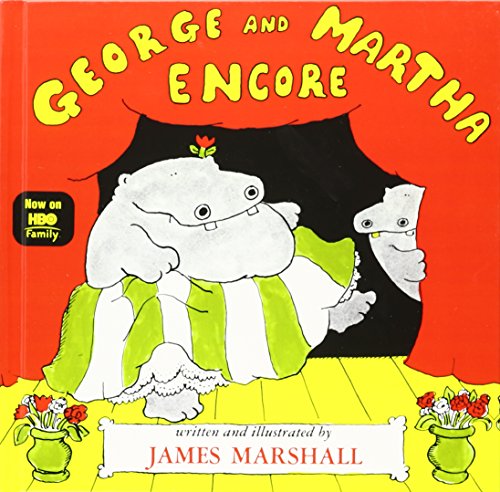 More stories about the two great chums: "The Dance Recital," "The French Lesson," "The Disguise," "The Beach," "The Garden."

James Marshall (1942–1992) created dozens of exuberant and captivating books for children, including The Stupids, Miss Nelson Is Missing!, and the ever-popular George and Martha books. Before creating his canon of classic, hilarious children’s books, James Marshall played the viola, studied French, and received a master’s degree from Trinity College. He also doodled. It was the doodles, and the unforgettable characters that emerged from them, that led him to his life’s work as one of the finest creators of children’s books of the twentieth century. In 2007, James Marshall was posthumously awarded the Laura Ingalls Wilder medal for his lasting contribution to literature for children.

"The idyllic friendship of those shy, pin-eyed, buck-toothed hippos ambles on." Kirkus Reviews

Book Description Paw Prints 2007-09-01, 2007. Library Binding. Condition: GOOD. Spine creases, wear to binding and pages from reading. May contain limited notes, underlining or highlighting that does affect the text. Possible ex library copy, will have the markings and stickers associated from the library. Accessories such as CD, codes, toys, may not be included. Seller Inventory # 3091800286

Book Description Paw Prints 2007-09-01, 2007. Condition: VERY GOOD. Pages are intact and are not marred by notes or highlighting, but may contain a neat previous owner name. The spine remains undamaged. Seller Inventory # 1435210778_abe_vg

Book Description Paw Prints 2007-09-01, 2007. Condition: Good. A+ Customer service! Satisfaction Guaranteed! Book is in Used-Good condition. Pages and cover are clean and intact. Used items may not include supplementary materials such as CDs or access codes. May show signs of minor shelf wear and contain limited notes and highlighting. Seller Inventory # 1435210778-2-4

Book Description Paw Prints 2007-09-01, 2007. Library Binding. Condition: Very Good. A copy that has been read, but remains in excellent condition. Pages are intact and are not marred by notes or highlighting, but may contain a neat previous owner name. The spine remains undamaged. At ThriftBooks, our motto is: Read More, Spend Less. Seller Inventory # G1435210778I4N00