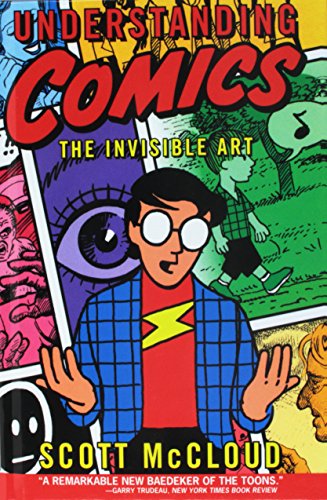 Praised throughout the cartoon industry by such luminaries as Art Spiegelman, Matt Groening, and Will Eisner, this innovative comic book provides a detailed look at the history, meaning, and art of comics and cartooning.

A comic book about comic books. McCloud, in an incredibly accessible style, explains the details of how comics work: how they're composed, read and understood. More than just a book about comics, this gets to the heart of how we deal with visual languages in general. "The potential of comics is limitless and exciting!" writes McCloud. This should be required reading for every school teacher. Pulitzer Prize-winner Art Spiegelman says, "The most intelligent comics I've seen in a long time."

Scott McCloud has been writing, drawing, and examining comics since 1984. Winner of the Eisner and Harvey awards, his works have been translated into more than sixteen languages. Frank Miller (Sin City, 300) called him "just about the smartest guy in comics." He lives with his family in southern California. His online comics and inventions can be found at scottmccloud.com.

Shipping: US$ 62.05
From United Kingdom to U.S.A.
Destination, rates & speeds