Items related to Rite of Passage 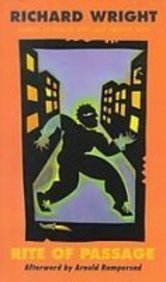 Fifteen-year-old Johnny Gibbs does, well in school, respects his teachers, and loves his family. Then suddenly, with a few short words, his idyllic life is shattered. He learns that the family he has loved all his life is not his own, but a foster family. And now he is being sent to live with someone else.

Shocked by the news, Johnny does the only thing he can think of: he runs. Leaving his childhood behind forever, Johnny takes to the streets where he learns about living life--the hard way.

Richard Wright, internationally acclaimed author of Black Boy and Native Son, gives us a coming-of-age story as compelling today as when it was first written, over fifty years ago.

‘Johnny Gibbs arrives home jubilantly one day with his straight ‘A’ report card to find his belongings packed and his mother and sister distraught. Devastated when they tell him that he is not their blood relative and that he is being sent to a new foster home, he runs away. His secure world quickly shatters into a nightmare of subways, dark alleys, theft and street warfare. . . . Striking characters, vivid dialogue, dramatic descriptions, and enduring themes introduce a enw generation of readers to Wright’s powerful voice.’—SLJ.

Richard Wright won international renown for his powerful and visceral depiction of the black experience. He stands today alongside such African-American luminaries as Zora Neale Hurston, James Baldwin, and Toni Morrison, and two of his books, Native Son and Black Boy, are required reading in high schools and colleges across the nation. He died in 1960.

Gr. 7-12. A newly discovered novella written by Wright in the 1940s evokes today's urban violence and also the "cold wet shelterless midnight streets" of Dickens' Oliver Twist. Johnny, a gifted 15-year-old student, runs away from his loving Harlem home when he discovers that he's really a foster child and that the faceless city bureaucracy is moving him to a new family. Suddenly alone on the streets, hungry, and lost, he survives with a brutal gang, fights the leader for dominance, and helps mug a man in the park. As the title suggests, this is an archetypal story of the loss of identity and the search for manhood. There's some overwriting at times, with far too many adverbs ("guiltily," "bawlingly," "dreadfully," etc.); a few minor characters are stereotyped; and the symbolism about crossing the barrier of childhood is overexplained. But the story is taut and terrible, and the account of Johnny trapped in a bleak, hostile city will hold teens fast. They'll also recognize the ironic truth of Johnny's friend who envies him the chance to break free of family. Opposed to the corrupt adults (including the police) who pay the kids to steal is the figure of an African American woman who calls out to Johnny in moral outrage for the crime of mugging an innocent person. Real or imaginary, she haunts Johnny. He wishes she would find him and bring him home. The eminent critic Arnold Rampersad, in a long, insightful afterword, shows how this story integrates many themes of Wright's work, including the relationship between racism, poverty, and violent crime. Hazel Rochman

Book Description Paw Prints 2008-04-18, 2008. Condition: Good. A+ Customer service! Satisfaction Guaranteed! Book is in Used-Good condition. Pages and cover are clean and intact. Used items may not include supplementary materials such as CDs or access codes. May show signs of minor shelf wear and contain limited notes and highlighting. Seller Inventory # 1435244311-2-4