Items related to From Christianity to Sin and Back Again: A Trilogy...

George E Thompson From Christianity to Sin and Back Again: A Trilogy of My Life

From Christianity to Sin and Back Again: A Trilogy of My Life 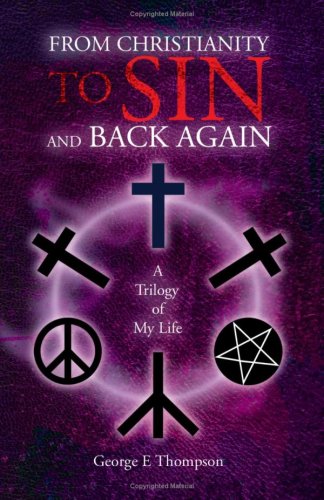 George E. Thompson was born in the small town of Ironton, Missouri, in the midfourties. His father was a minister, and his mother was the devoted pastor's wife. They moved to Kansas City when George was three; his father pastored several churches before finally moving to Fulton, Missouri, where George graduated from Fulton High School and moved on to attend college at Hannibal-LaGrange Junior College and finished his degree program in Northeast Missouri State College. Mr. Thompson was usually in some kind of depression and found expression in poetry at an early age. He continued to write poems while in college and on into a ten- year period of serving his country in the US Air Force. Each poem became a cathartic experience that seemed to life his "doom-and-gloom" phase and was empowered by the words he wrote to raise his consciousness. He realized that a Higher Power existed and had given him the gift of writing, which he shared while working at a junior college in Virginia. Published in the school's annual poetry contest, George wrote armchair travelogues for several local papers and had a book review column in a military paper. He reviewed five books each week and posted three reviews each week for a year-all of the books supplied by the New York Times. Suffering disillusionment after a divorce, moving away from God, and arrested for drinking while driving, Mr. Thompson has realized how effective his words have become and how many people are affected by those same words. He continues to write poetry during his retirement years, has more books of poetry to publish, and enjoys the peace and quiet of country life since his return to his birthplace.

1. From Christianity to Sin and Back Again: A Trilogy of My Life

2. From Christianity to Sin and Back Again: A Trilogy of My Life