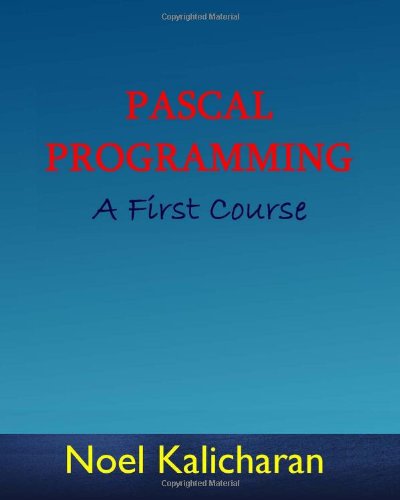 This book attempts to teach computer programming to the complete beginner. It assumes you have no knowledge whatsoever about programming and a knowledge of primary school mathematics is all that is required. The main goal is to teach fundamental programming principles using Pascal, a popular language used in schools. However, the book is more about teaching programming basics than it is about teaching Pascal. Basic programming proficiency requires that you know, at least, the following language features: the primitive data types of the language (integer, floating-point, character); how to write input/output statements; how to write conditional statements (if, if...else); how to write looping statements (while, for); how to write functions and how to declare and use arrays. But, more importantly, you need to be able to write programs to solve problems using these features. This book explains all of the above in an easy, conversational style.

Dr. Noel Kalicharan is a Senior Lecturer in Computer Science at the University of the West Indies, St. Augustine, Trinidad. For more than 30 years, he has taught programming courses to people at all levels. He has been teaching programming, among other things, at the University since 1976. In 1988, he developed and hosted a 26-programme television series entitled Computers - Bit by Bit. Among other things, this series taught programming to the general public. He is always looking for innovative ways to teach logical thinking skills which go hand in hand with programming skills. His efforts resulted in two games - BrainStorm! and Not Just Luck - which won him the Prime Minister's Award for Invention and Innovation in 2000 and 2002. He is a Computer Science author for Cambridge University Press which published his international successes, Introduction to Computer Studies and C By Example. The C book is ranked among the best in the world for learning the C programming language. It has received glowing reviews from readers as far away as Australia, Canada, India and Scotland. This book is written in a more leisurely style. Born in Lengua Village, Princes Town, Trinidad, he received his primary education at the Lengua Presbyterian School and his secondary education at Naparima College. He is a graduate of The University of the West Indies, Jamaica, the University of British Columbia, Canada and The University of the West Indies, Trinidad.