Items related to My Sister's Keeper 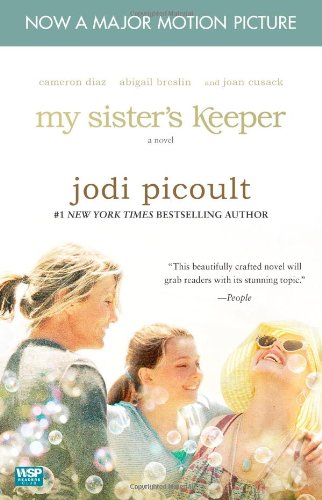 New York Times bestselling author Jodi Picoult is widely acclaimed for her keen insights into the hearts and minds of real people. Now she tells the emotionally riveting story of a family torn apart by conflicting needs and a passionate love that triumphs over human weakness.

Anna is not sick, but she might as well be. By age thirteen, she has undergone countless surgeries, transfusions, and shots so that her older sister, Kate, can somehow fight the leukemia that has plagued her since childhood. The product of preimplantation genetic diagnosis, Anna was conceived as a bone marrow match for Kate -- a life and a role that she has never challenged...until now. Like most teenagers, Anna is beginning to question who she truly is. But unlike most teenagers, she has always been defined in terms of her sister -- and so Anna makes a decision that for most would be unthinkable, a decision that will tear her family apart and have perhaps fatal consequences for the sister she loves.

My Sister's Keeper examines what it means to be a good parent, a good sister, a good person. Is it morally correct to do whatever it takes to save a child's life, even if that means infringing upon the rights of another? Is it worth trying to discover who you really are, if that quest makes you like yourself less? Should you follow your own heart, or let others lead you? Once again, in My Sister's Keeper, Jodi Picoult tackles a controversial real-life subject with grace, wisdom, and sensitivity.

Jodi Picoult is the author of nineteen novels, including the #1 New York Times bestsellers Sing You Home, House Rules, Handle With Care, Change of Heart, Nineteen Minutes, and My Sister’s Keeper. She lives in New Hampshire with her husband and three children. Visit her website at JodiPicoult.com.

When I was little, the great mystery to me wasn't how babies were made, but why. The mechanics I understood -- my older brother Jesse had filled me in -- although at the time I was sure he'd heard half of it wrong. Other kids my age were busy looking up the words penis and vagina in the classroom dictionary when the teacher had her back turned, but I paid attention to different details. Like why some mothers only had one child, while other families seemed to multiply before your eyes. Or how the new girl in school, Sedona, told anyone who'd listen that she was named for the place where her parents were vacationing when they made her ("Good thing they weren't staying in Jersey City," my father used to say).

Now that I am thirteen, these distinctions are only more complicated: the eighth-grader who dropped out of school because she got into trouble; a neighbor who got herself pregnant in the hopes it would keep her husband from filing for divorce. I'm telling you, if aliens landed on earth today and took a good hard look at why babies get born, they'd conclude that most people have children by accident, or because they drink too much on a certain night, or because birth control isn't one hundred percent, or for a thousand other reasons that really aren't very flattering.

On the other hand, I was born for a very specific purpose. I wasn't the result of a cheap bottle of wine or a full moon or the heat of the moment. I was born because a scientist managed to hook up my mother's eggs and my father's sperm to create a specific combination of precious genetic material. In fact, when Jesse told me how babies get made and I, the great disbeliever, decided to ask my parents the truth, I got more than I bargained for. They sat me down and told me all the usual stuff, of course -- but they also explained that they chose little embryonic me, specifically, because I could save my sister, Kate. "We loved you even more," my mother made sure to say, "because we knew what exactly we were getting."

It made me wonder, though, what would have happened if Kate had been healthy. Chances are, I'd still be floating up in Heaven or wherever, waiting to be attached to a body to spend some time on Earth. Certainly I would not be part of this family. See, unlike the rest of the free world, I didn't get here by accident. And if your parents have you for a reason, then that reason better exist. Because once it's gone, so are you.

Pawnshops may be full of junk, but they're also a breeding ground for stories, if you ask me, not that you did. What happened to make a person trade in the Never Before Worn Diamond Solitaire? Who needed money so badly they'd sell a teddy bear missing an eye? As I walk up to the counter, I wonder if someone will look at the locket I'm about to give up, and ask these same questions.

The man at the cash register has a nose the shape of a turnip, and eyes sunk so deep I can't imagine how he sees well enough to go about his business. "Need something?" he asks.

It's all I can do to not turn around and walk out the door, pretend I've come in by mistake. The only thing that keeps me steady is knowing I am not the first person to stand in front of this counter holding the one item in the world I never thought I'd part with.

"I have something to sell," I tell him.

"Am I supposed to guess what it is?"

"Oh." Swallowing, I pull the locket out of the pocket of my jeans. The heart falls on the glass counter in a pool of its own chain. "It's

fourteen-karat gold," I pitch. "Hardly ever worn." This is a lie; until this morning, I haven't taken it off in seven years. My father gave it to me when I was six after the bone marrow harvest, because he said anyone who was giving her sister such a major present deserved one of her own. Seeing it there, on the counter, my neck feels shivery and naked.

The owner puts a loop up to his eye, which makes it seem almost normal size. "I'll give you twenty."

"It's worth five times that!" I'm guessing.

The owner shrugs. "I'm not the one who needs the money."

I pick up the locket, resigned to sealing the deal, and the strangest thing happens -- my hand, it just clamps shut like the Jaws of Life. My face goes red with the effort to peel apart my fingers. It takes what seems like an hour for that locket to spill into the owner's outstretched palm. His eyes stay on my face, softer now. "Tell them you lost it," he offers, advice tossed in for free.

If Mr. Webster had decided to put the word freak in his dictionary, Anna Fitzgerald would be the best definition he could give. It's more than just the way I look: refugee-skinny with absolutely no chest to speak of, hair the color of dirt, connect-the-dot freckles on my cheeks that, let me tell you, do not fade with lemon juice or sunscreen or even, sadly, sandpaper. No, God was obviously in some kind of mood on my birthday, because he added to this fabulous physical combination the bigger picture -- the household into which I was born.

My parents tried to make things normal, but that's a relative term. The truth is, I was never really a kid. To be honest, neither were Kate and Jesse. I guess maybe my brother had his moment in the sun for the four years he was alive before Kate got diagnosed, but ever since then, we've been too busy looking over our shoulders to run headlong into growing up. You know how most little kids think they're like cartoon characters -- if an anvil drops on their heads they can peel themselves off the sidewalk and keep going? Well, I never once believed that. How could I, when we practically set a place for Death at the dinner table?

Kate has acute promyelocytic leukemia. Actually, that's not quite true -- right now she doesn't have it, but it's hibernating under her skin like a bear, until it decides to roar again. She was diagnosed when she was two; she's sixteen now. Molecular relapse and granulocyte and portacath -- these words are part of my vocabulary, even though I'll never find them on any SAT. I'm an allogeneic donor -- a perfect sibling match. When Kate needs leukocytes or stem cells or bone marrow to fool her body into thinking it's healthy, I'm the one who provides them. Nearly every time Kate's hospitalized, I wind up there, too.

None of which means anything, except that you shouldn't believe what you hear about me, least of all that which I tell you myself.

As I am coming up the stairs, my mother comes out of her room wearing another ball gown. "Ah," she says, turning her back to me. "Just the girl I wanted to see."

I zip it up and watch her twirl. My mother could be beautiful, if she were parachuted into someone else's life. She has long dark hair and the fine collarbones of a princess, but the corners of her mouth turn down, like she's swallowed bitter news. She doesn't have much free time, since a calendar is something that can change drastically if my sister develops a bruise or a nosebleed, but what she does have she spends at Bluefly.com, ordering ridiculously fancy evening dresses for places she is never going to go. "What do you think?" she asks.

The gown is all the colors of a sunset, and made out of material that swishes when she moves. It's strapless, what a star might wear sashaying down a red carpet -- totally not the dress code for a suburban house in Upper Darby, RI. My mother twists her hair into a knot and holds it in place. On her bed are three other dresses -- one slinky and black, one bugle-beaded, one that seems impossibly small. "You look..."

Tired. The word bubbles right under my lips.

My mother goes perfectly still, and I wonder if I've said it without meaning to. She holds up a hand, shushing me, her ear cocked to the open doorway. "Did you hear that?"

"I didn't hear anything."

But she doesn't take my word for it, because when it comes to Kate she doesn't take anybody's word for it. She marches upstairs and opens up our bedroom door to find my sister hysterical on her bed, and just like that the world collapses again. My father, a closet astronomer, has tried to explain black ho...